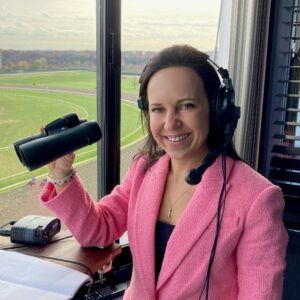 Jessica Paquette fell in love with horses when she was a little girl.

Paquette remains passionate about horses, an enthusiasm that is evident when she is at the microphone. The 37-year-old is the track announcer at Parx Racing in Bensalem. She is the first and only woman in North America to call horse races on a regular basis. She also serves as the track’s cable TV host and on-air handicapper and is involved in its social media efforts.

Paquette has done it all at various facilities over her two decades in the racing industry. She has worked in marketing and public relations as an analyst, handicapper, and director of racing operations. She was also a consultant on integrity and safety issues. she is director of communications and annual fund for the Thoroughbred Retirement Foundation.

She called her first race at Suffolk Downs in her native Massachusetts in 2014 when the regular announcer was delayed getting to the track. Later, she called some quarter horse races in Texas on a fill-in basis. 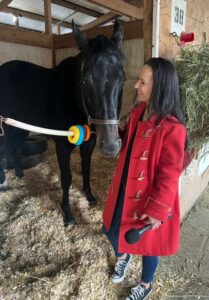 “The more I did it, the more fun it became,” she said.

She was familiar with Parx after assisting with the track’s coverage of the Pennsylvania Derby in 2020 and 2021. When track announcer Chris Griffin took a job at Monmouth Park in New Jersey last fall, Paquette replaced him. She made her Parx debut on November 15.

She makes the trip from Massachusetts, where she lives, each Sunday night in advance of her three-day work week in Bensalem. The track typically runs races on Mondays, Tuesdays, and Wednesdays, save for special occasions such as the days of the Triple Crown races, the Pennsylvania Derby, and Father’s Day.

There are 11 races on each day’s card. She must memorize the numbers and colors of the silks of each horse in each race and then forget them instantly the moment the race concludes and begin preparing for the next one. It is the hardest task there is in the realm of sports broadcasting and public address work.

The night before each card, she will create a replica of the next day’s program and add the colors of each horse’s silks to the chart for each race.

“I color the silks because I’m fundamentally an anxious person,” Paquette said, “and I like to come as prepared and with as much homework done as I can before the day of racing.”

When talking about her job requirements, Paquette, who has a journalism degree, thinks back to her days as a student.

“I was very good at memorizing and then promptly forgetting,” she said. “I would cram for a test, do well on the test, and then forget absolutely everything. That has been just a natural skill of mine.

“But, I really liken it to a muscle. Certainly, memorization was really hard for me the first couple of weeks. And the more I do it, I feel like the stronger it gets. It’s a muscle that needs to be exercised and flexed. And you memorize it, you absorb it, you associate the colors of the silks.

“And occasionally some stick. There will be some horses That I will probably always be able to tell you so and so’s silks look like this, and then there are some that the second they cross the finish line, he’s gone. Until I have to speak of them again.”

Paquette strives to strike a balance between providing basic necessary information, including each horse’s position in the field, and adding anecdotes to her presentation.

“As I continue to develop my craft, I am trying to stick to the basics as much as possible,” she said. “I’ve gotten a lot of great advice from some very good announcers, and one that stuck with me was, ‘Don’t be cute until you’re good.’

“The better I get and the stronger and more confident, then I can start trying to be a little clever and a little more colorful. But for now, I’m focusing on getting them around, having the correct horse in the right place, and giving the most accurate information possible.”

The ability to keep track of horses during a race is an acquired talent. Paquette’s mentors in the business include, among others, Larry Collmus, the voice of the Triple Crown and Breeders Cup races for NBC, Griffin, and T.J. Thornton, who worked in various roles at Suffolk Downs and officiated at Paquette’s wedding.

“(Thornton) was the one I called my first week when I said, ‘Oh my God, what have I done?’” Paquette recalls. “He’s been a great sounding board.”

Paquette’s first weeks at Parx had a learning curve. Inevitably, she has attracted detractors whose criticisms have ranged from humorous to profane and vulgar.

“Imagine having your first day of a job having thousands of people watching you and telling you every mistake that you made,” she said. “How you’re the worst person to ever do this job and getting many opinions, not all of the kind or constructive on the job that you’re doing. It’s been certainly challenging.”

But Paquette understands her role in the history of thoroughbred racing and as a role model for women following behind her.

“The first one through the wall gets the arrows, right?” she said. “So, I’m hoping the path is a little easier for a woman coming behind me to do this.

“I think it’s a rare honor and an opportunity to make the sport or whatever profession you’ve dedicated your life to better for what comes (after you). That’s the best legacy you could ever hope to leave, right? Leave it just a little bit better than it was when you were there.”