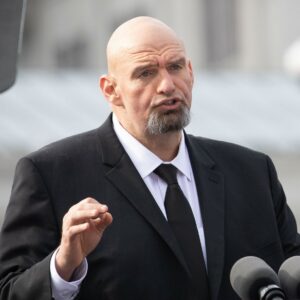 Where is the big guy when you need him?

That’s what state senators on the State Government Committee are asking about Lt. Gov. John Fetterman.

Committee members seeking to rewrite the 1974 law detailing what happens when the governor or lieutenant governor is disabled hoped to hear from him. Fetterman, who is also the Democratic nominee for the U.S. Senate, did not respond to a letter from that committee asking for his input. Fetterman went on leave after suffering a stroke in April.

Fetterman originally notified the General Assembly he was disabled and unable to perform his duties when he had surgery to implant a defibrillator and pacemaker. He has since sent notification that he was no longer disabled after the statutory six days, said state Sen. David Argall (R-Berks/Schuylkill).

The committee, chaired by Argall, held a hearing on the topic on July 14. But Fetterman was a no-show.

In a letter, Argall asked Fetterman to give his input by Aug. 1, allowing the committee to move forward with possible changes to the law, which is so antiquated that it mentions telegrams.

“Your perspective on this issue would be very instructive to our committee’s review of this issue,” Argall wrote. “Specifically, we would like to know more about what procedures your office followed in terms of notifying the Governor’s Office in the immediate aftermath of your hospitalization on May 13, including the timing and means of notification. This information is subject to the state’s Right to Know Law, but I hope you would provide this information voluntarily in the interest of full transparency in advance of any testimony you may provide.

“We would also be interested to learn whether your condition during your period of hospitalization warranted the disability procedures being invoked at that time. You were quoted in news reports as saying you almost died, which speaks to the gravity of the situation. In addition, given your unique perspective on this matter, your recommendations on how the law could be improved would be welcomed and appreciated,” Argall wrote.

In a recent interview, Argall told DVJ he had not heard back from Fetterman.

Although he offered Fetterman the option of talking to the committee over Zoom instead of in person and they asked Fetterman to pick the date or place. Still no response.

“We were being very, very accommodating,” said Argall.

Fetterman’s chief of staff, Christina Kauffman, did not respond to a DVJ request for comment or explanation. And as of this writing, Fetterman has not returned to his duties as state Senate president, “as is his constitutional duty,” Argall said.

Fetterman was “missing for 18 days of voting at the height of our budget season,” said Argall.

It was unclear if Fetterman had attended the June Board of Pardons meeting, which he chairs as part of his responsibility as lieutenant governor. Argall said those meetings are no longer on video, which is “a serious concern.”

But the Senate committee did hear from former Acting Gov. Mark Singel, who took over for then Gov. Robert Casey Sr. in June 1993 when Casey underwent a heart and liver transplant.

“My recollection of that moment in Pennsylvania history is that there was a reasonable amount of good faith and bipartisanship in both the executive and legislative branches that made the transition possible,” Singel wrote.

He believes the statute does not need to be changed.

“The language in the constitution and in the statutes is, in my opinion, sufficient to ensure a peaceful transition of power should either the governor or lieutenant governor become disabled. Additional requirements like establishing reporting timelines on notifications or other alterations would only add to the stress of what is, by definition, a challenging time for the public officials involved and for the Commonwealth itself.

“I would caution against ‘fixing’ a process that does not seem to be broken,” Singel said.

Sen. Sharif Street (D-Philadelphia), the committee’s co-chair, said Fetterman gave notice of his absence and “the process is working.”