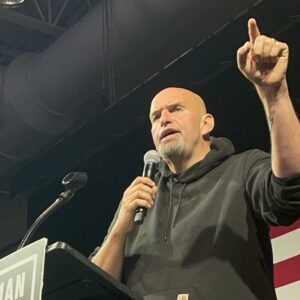 Democratic U.S. Senate candidate John Fetterman returned to the campaign trail in Erie on Friday, three months after suffering a serious stroke that he acknowledged could have ended his life and has left him with lingering health problems.

Fetterman, Pennsylvania’s lieutenant governor, only addressed the enthusiastic crowd of supporters at the Bayside Convention Center for 11 minutes. He did not shy away from discussing his health issues.

“My life could have ended. It’s the truth. But I’m so grateful to be here tonight,” Fetterman told the crowd, his speech halting at times.

He also had plenty to say about his GOP opponent, Dr. Mehmet Oz. “There are a lot of differences between me and Dr. Oz. Who would have ever thought I’d be the normal one?”

Before that event, Fetterman granted his first post-recovery interview to KDKA TV in Pittsburgh, saying that he was “grateful” to have survived.

“That was a very grave situation at the time,” he told John Delano. “If it had happened at 1:00 in the morning, or if it would have happened in Elk County, I probably wouldn’t be here with you right now.”

Fetterman said his doctors okayed his return to the campaign trail.

“I have zero, no physical limits,” said the candidate. But he did admit he was having difficulties with “auditory processing,” which Delano called a hearing issue. And he also has some lingering problems with speech when he will “mush two words together,” Fetterman said in the interview. He plans to go to all 67 counties before the election.

Oz, who according to his campaign “has traveled over 3,000 miles, made over 140 campaign stops, and visited over 30 counties” since winning the primary, has spent three months mocking what they call Fetterman’s “basement campaign.”

“Despite news that John Fetterman is attending closed-door fundraisers, it has been 91 days since John Fetterman’s last public campaign event,” the Oz campaign emailed Thursday.

Oz has called on Fetterman to agree to five debates before the Nov. 8 election.

“Dr. Mehmet Oz has committed to participate in five moderated debates across Pennsylvania. Fetterman has agreed to zero debates, and he has hidden from reporters and voters for 90-plus days because he doesn’t want to answer for his radical views. The people of Pennsylvania deserve to hear from their candidates, and it’s time that Fetterman answers the tough questions,” said Rachel Tripp, senior communications advisor.

Fetterman’s campaign did not respond when asked whether he plans to debate Oz.

However, Republican consultant Charlie Gerow says he believes Oz can still win if he tailors his message to what voters are talking about and stops the daily social media jibs that “make people laugh inside campaign headquarters.”

Oz should “talk about gas prices and grocery prices,” said Gerow. “And the fact that you can’t get things you’re looking for at the store from baby formula to feminine products to food. I mean, that’s what people are concerned about when they wake up in the morning. Not with how many days John Fetterman has been off the campaign trail.”

“I want to make it clear, I think (Oz) can win,” said Gerow. “But he’s got to hone his message and be focused like a laser beam on what voters are talking about and thinking about.”

The Republican National Committee welcomed Fetterman back to the campaign trail with a barrage of criticism. It cited Fetterman’s policies, including supporting Democrats’ $1.9 trillion ‘stimulus’ that fueled inflation.

“Now, in the middle of a recession, Fetterman supports the ‘Bidenflation Scam,’ a bill which will shrink the economy, kill thousands of jobs, impose crushing taxes on families and businesses, and worsen – not reduce – inflation,” the RNC claimed.

Additionally, Fetterman signed a pledge to ban fracking. He said, “I don’t support fracking at all and I never have,” calling it a “stain” on Pennsylvania.”

The RNC also slammed Fetterman for depending on his parents for support well into adulthood.

“While claiming to understand the plights of everyday Pennsylvanians, Fetterman was living off of his parents’ money well into his 40s after attending Harvard University and buying a condo from his sister for $1.”

The group also panned his record as the chair of the state Board of Pardons where he  appointed Celeste Trusty, who has advocated for disarming the police and abolishing “mandatory life without parole as a sentence for first- and second-degree murder.” Pennsylvania sheriffs have voiced concern about his soft-on-crime record and the Pennsylvania FOP chose to endorse Oz over Fetterman, the RNC said.

“If John Fetterman truly understood the plight of Pennsylvania workers and families, he’d be adamantly opposed to his party weaponizing the IRS. Does Fetterman support deploying 87,000 additional IRS agents for the purpose of auditing everyday Americans? Pennsylvanians definitely do not,” said RNC spokesperson Sean Shute.