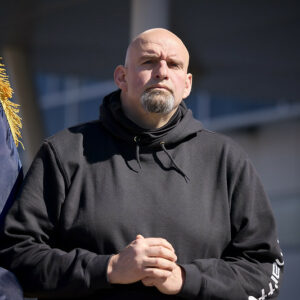 “I’ve been traveling the commonwealth talking to voters about my vision and ideas for nearly a decade,” Fetterman wrote. “I’m proud of my record as mayor and as Lieutenant Governor and I’m eager to put my record and my values up against Dr. Oz’s any day of the week.

“As I recover from this stroke and improve my auditory processing and speech, I look forward to continuing to meet with the people of Pennsylvania.”

Fetterman’s comments were a response to a statement released by his GOP opponent, Dr. Mehmet Oz, mocking the Democrat for declining to commit to any debates. Among the concessions the Oz campaign facetiously suggested it is willing to make for Fetterman:

• We will allow John to have all of his notes in front of him along with an earpiece so he can have the answers given to him by his staff, in real time.

• We will pay for any additional medical personnel he might need to have on standby.

“The first debate at KDKA is set for one week from today…but there’s been no response from lying liberal Fetterman,” said Brittany Yanick, Communications Director for Dr. Oz for Senate. “I mean, if I had to defend
releasing convicted murderers and not paying my taxes 67 times, I’d be pretty worried too. I guess John Fetterman is afraid of debating Doctor Oz.”

Fetterman suggested he’s declining a debate invitation to work on his recovery.

“My recovery may be a joke to Dr. Oz and his team, but it’s real for me. I will not be participating in a debate the first week of September, but look forward to having a productive discussion about how we can move forward and have a real conversation on this once Dr. Oz and his team are ready to take this seriously.”

Voter: “Are you afraid to debate Dr. Oz?”

Fetterman’s health continues to be a contentious topic on the campaign trail and a sensitive one for the Lt. Governor. The conservative news site the Washington Free Beacon posted a video of Fetterman being asked at a campaign event if he’s afraid to debate Oz. Fetterman appears disoriented and is quickly hustled away by a staff member.

While Fetterman has had a double-digit lead in the polls for most of the summer, the two most recent polls — Susquehanna and Emerson — show Oz gaining, down by just four or five points.