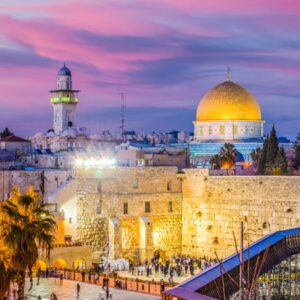 FELDMAN: ‘It’ Can Happen Here…And Already Is

Any allusion by Jews in America that “it” can’t happen here should evaporate as quickly as the rain from a mid-day desert thunderstorm.

The “it” of course refers to conditions deteriorating so badly here that life for Jews in this country would be untenable. It has already become uncomfortable for many who are fearful of wearing garb that identifies them as Jewish, or walking to and from synagogue.

The latest attack on a Jewish institution and Jews: A Muslim terrorist stormed into Congregation Beth Israel in Colleyville, Texas, near Ft. Worth, and took the rabbi and three congregants hostage to wrest the release from prison of Muslim terrorist Aafia Siddiqui (a k a “Lady al-Qaeda”) this past Shabbat. Thanks to G-d’s grace and the work of local, state and federal law enforcement, none of the hostages suffered physical harm.

Yes, the Jewish People continue to be the prey of choice by a spectrum of attackers.

Rabbi Charlie Cytron-Walker credited a recent security workshop for the well-being of the hostages – he said training made it possible for him and congregants to know when and how to escape their captor. It is unclear whether or not a security guard had been on the premises at the time of the attack, or whether or not that would have made a difference.

Attacks against Jews and Jewish institutions in America have increased dramatically in recent years and especially in 2021. The meteoric rise of violence and other physical attacks coincides with increased rhetorical attacks against Jews in academia, in the media, among some government officials and on social media. Most of these attacks have been directed at the world’s largest and world’s oldest Jewish community: The Jewish state of Israel.

Past taboos about attacking Jews in public have evaporated.

All of the verbal attacks are based on outright lies and distortions to advance what is portrayed as the “Palestinian” cause, as well as eternal stereotypes against Jews. Nearly all are part and parcel of the generations-old Arab and Muslim war against the Jewish People.

What happened to Jews in Europe time and time again did not begin with the murders of tens of thousands and then millions. Each began with the combination of lies about and dehumanization of Jewish People at an institutional level including by academia, media and government.

Accusing someone of being racist or of oppressing others, or claiming they commit “apartheid” or are “colonizers” are some of the most damaging charges that one can make against an individual, a People or a nation. Today there is a steady stream – one repeated ad infinitum – of such false accusations against the Jewish People and the Jewish state. Academia, media and some in government are again the chief disseminators.

No, we are not now on the precipice, though we must raise awareness and call for a concerted effort by all who are decent to retard the attacks on Jewry immediately before more are terrorized and attacked and our civil liberties are further damaged.

A few years ago and earlier, American Jews were shocked to witness or learn about the level of security necessitated at synagogues, Jewish schools and community centers in Europe to safeguard the premises and those inside. It was unimaginable that American Jewry would have to install bollards around the perimeters of its buildings, hire armed guards, have 24/7 security cameras and locked doors, and resemble “Fort Knox.” But today in the United States, it is rare that a Jewish institution does not have at least one of these features – and many have all of them.

How awful. This is not normative and must not be accepted as “the new normal.”

Why is it that such persecution of the Jewish People in America is permissible? Why is it that to advance their cause, others can lie about, demonize and dehumanize the Jewish People for exercising their rights to self-determination as well as their self-defense? When did academia, media and some government officials abandon standards of facts, accuracy and balance to instead further an agenda that has as its goal inflicting a cataclysm on the Jewish People, who have been persecuted and annihilated from time immemorial?

Until deterrence is restored, there must be a heavy price to pay for lying about Jews and inciting Jew-hatred.

The attack against Congregation Beth Israel in Colleyville will likely be looked upon as a singular event in this era of fleeting attention spans and denial of Jew-hatred. Some have ridiculously and outrageously claimed that the attack had nothing to do with Jews at all! But there is a bigger picture taking shape here and this attack is one tile in a larger mosaic. By speaking out now and taking action now, we can prevent the picture from becoming an ugly monstrosity. All people of good will must do so. Surely, history will be the judge of what we did and what we failed to do.

Steve Feldman is in his 20th year as executive director of Greater Philadelphia Zionist Organization of America. He is a journalist with experience both in print media and radio.