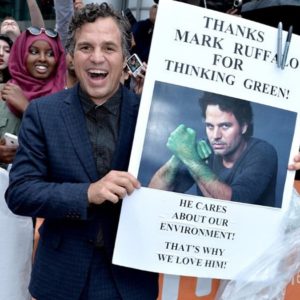 A liquid natural gas facility near Philadelphia got the go-ahead from a federal agency, resulting in a big thumbs-down from some very famous environmental activists.

The Delaware River Basin Commission (DRBC) recently approved a construction permit for the Gibbstown Logistics Center in Gloucester County, NJ, which will be capable of handling exports of liquified natural gas. The project from New Fortress Energy involves transporting the gas from the Marcellus Shale across Pennsylvania to the terminal using 100-car trains that activists have called “bomb trains.”

Pennsylvania State Sen. Katie Muth, who represents Philadelphia’s suburbs, likened the trains to “the energy of the Hiroshima bomb” in a tweet opposing the project.

A flurry of statements from environmental groups came out after Wednesday’s ruling, including one from actor Mark Ruffalo who recently starred in a movie about contaminated water in West Virginia calling the commission’s decision “shameful.” Ruffalo and fellow actor and activist Leonardo DiCaprio were among the signatories on a letter to Govs. Phil Murphy (D-NJ), Andrew Cuomo (D-NY), John Carney (D-DE), and Tom Wolf (D-PA) opposing the terminal. The governors serve as ex-officio members of the Commission and appoint alternates to represent them.

The letter argued that the project violates the “strict water quality laws and regulations for toxic” chemicals, and the commission should hold off on voting until President-elect Joe Biden takes offices. The U.S. Army Corps of Engineers, which is also represented on the Commission, previously approved the project as has the New Jersey Department of Environmental Protection.

Ruffalo issued a statement calling the decision “shameful” and put the governors on notice.

“We will not stand by and let our leaders deceive us in this way,” he said. “We will hold them accountable. And we will replace them.”

The Gibbstown terminal is a $450 million private port that, in addition to exporting LNG, could also handle imported automobiles and be a staging area for proposed wind farms off the New Jersey coast.

New Fortress Energy proposal to carry the LNG by trains means fewer tractor trailers will have to traverse roads through parts of Ohio, Pennsylvania, and New Jersey. While there traditionally has not been much demand for moving the commodity by rail, the spike in natural gas supplies from fracking and other extraction technologies is changing that.

“For decades, railroads have safely shipped cryogenic liquids similar to LNG, and more than 99.99 percent of all hazmat shipments reach their destination without a release caused by an accident,” the Association of American Railroads previously said. “Recent increases in supply and demand for natural gas have sparked interest in permitting LNG by rail shipments — a far safer option for hazmat transport than over-the-road shipments.”

In August, the Pipeline and Hazardous Materials Safety Administration (PHMSA), which is part of the U.S. Department of Transportation finalized a rule to let railroads transport LNG without special permits. Fourteen states, including Pennsylvania and New Jersey are fighting the rule in court. It will be up to the Biden Administration to decide how to proceed against the lawsuits.

Meanwhile, the environmental community made clear it sees the Gibbstown approval a betrayal from the Democratic governors.

“The DRBC has sold out the Basin and sided with the fracking industry, said Jeff Tittel, director of the New Jersey Sierra Club. “This is the worst decision the commission has ever made. Their decision is outrageous and dangerous.”

“Today’s vote is dereliction of duty by the DRBC and their Governor representatives, which will cause irreparable harm to the Delaware River, deepen our climate crisis and threaten our communities,” said Doug O’Malley, director of Environment New Jersey.

Several of the groups pledged to ask the Biden Administration to overturn the decision or carry on their fight in court.

Despite Despite Shortages and Soaring Prices, Dem AGs Fight to… Read More