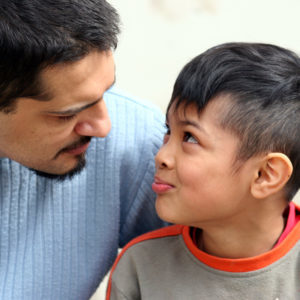 a young man talking with his son
[IS] Opinions

Fatherhood: Our Superpower in Confronting Inequality

At this critical juncture in the life of our country, Americans are in desperate need of fathers to step forward and lead us down the path of resolution.

The epidemic of fatherlessness strongly correlates to a kaleidoscope of individual, community and society-wide heartaches. Together these drain our social goodwill, widen economic inequality, saddle our communities with crime and injustice and levy a massive financial cost on our nation.

According to the U.S. Census Bureau, 19.7 million children, more than one in four, live without a father in the home.

These children are four times more likely to live in poverty, seven times more likely to become pregnant as teens, and twice as likely to die as an infant, suffer from obesity or drop out of high school. The challenges persist throughout adulthood, with dramatically higher rates of crime, incarceration, and drug abuse.

Worst of all, boys raised without a father are more likely to leave their own children fatherless—and the fire spreads across the generations.

Legislation alone cannot solve this, nor can protests. America needs a new generation of Founding Fathers — by the thousands, across all races and socioeconomic backgrounds — to rise up of their own accord and lead our nation to redemption.

I became interested in the epidemic of fatherlessness as a young man, when I moved to inner city Brooklyn.

I came face to face with the ravages of poverty, crime, and drugs. It was impossible to miss the sky-high rate of young men around me who were raised without a father figure. Having grown up in a tightly knit Texas town, I began to realize how much I had taken my own loving and present father for granted.

When he passed away some years later, after I had two sons and a daughter of my own, I set about to speak and advocate for fatherhood nationwide.

Since then, I have seen it all across America: Responsible fathers make for responsible future citizens. And I have become convinced that we must never blame children for the faults of their parents, yet we must empower those children to break the cycle of irresponsible parenthood.

To rally our boys to become the fathers we need, we must end the coordinated assault on manhood. We cannot resolve our problems by discrediting the traditional concept of masculinity, which is not about bravado, but about bravery, responsibility, and resilience.

We must call for all men to seek the full stature of authentic manhood, accept full responsibility for their decisions, and raise children who will do the same.

These were by and large the traits of America’s Founding Fathers, though they, like all men and women, had flaws. Those founding fathers wrote that all men are created equal, yet many of them held slaves.

We continue to reap the bitter fruits of that original sin today. Far too many of our people are still fundamentally unequal, and the frustration is pouring onto the streets.

Fatherhood is our superpower that transcends it all.

We need you to be a new generation of Founding Fathers, and together to foster a better world for our children, and better children for our world.

Gary D. Rogers is a national speaker on fatherhood and the author of “Unlocking the Power of Fatherhood.”