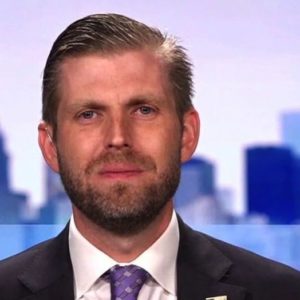 Eric Trump tells Delaware Valley Journal his father’s “law and order” campaign message will help the president in the Philadelphia suburbs and help him hold onto Pennsylvania in November — a state many see as a “must win” if President Trump is to be re-elected.

“If you look at what, what the radical left is doing all across the country, they’re endangering communities, are endangering our suburbs,” Eric Trump said. “It’s horribly scary.”

The president’s son spoke to DVJ in advance of his campaign appearance in Milford, PA Thursday night.

Trump also referenced the recent incidents in Lancaster, PA, where police arrested 12 adults and one juvenile after hundreds took to the streets following the shooting death of Ricardo Munoz. Some Pennsylvania Democrats have complained about the high bails set for some of those arrested. Magisterial District Judge Bruce A. Roth set bail for nine of the defendants at $1 million each.

“These people are terrorizing communities. They’re throwing bricks at law enforcement officers, throwing frozen water bottles and the heads of our incredible men and women in blue,” Trump said. “I think you should have very high bails and you should go to jail. America’s not into that.”

“Look at the rates of new gun ownership [in the Delaware Valley], in the suburbs and in America. People are afraid,” Trump added.

In 2016, Hillary Clinton won 11 counties in Pennsylvania but ran the table in Philadelphia and the four suburban collar counties of the Delaware Valley. And the #BlueWave of the 2018 mid-term elections was seen as a suburban rebuke of the president.

Trump has chipped away at a Biden lead in Pennsylvania, especially when compared to similar swing states like Michigan and Wisconsin.

In late July, the RealClearPolitics polling average put Democratic nominee Joe Biden at 50.8 percent support with Trump at 42.3 — a spread of 8.5 points.

The same average last week, however, put Biden at 48.0 and Trump at 44.8 percent, moving the overall spread between the two candidates down to just 3.2 points, the lowest gap since April.

Writing in Newsweek, Jacob Jarvis noted this is a smaller gap between the candidates than Hillary Clinton enjoyed in Pennsylvania at about the same time in the election cycle.

“Real Clear Politics’ trackers put [Clinton] at 5.2 points ahead in Michigan and plus 6.6 points in Pennsylvania on September 20, 2016,” Jarvis said.

“I think Pennsylvania is still in play,” said Geoffrey Skelley, a polling analyst with the website fivethirtyeight.com.

“With Biden up about 5 points there if things tighten a little bit more all it would take is maybe a little polling error for things to be off there,” he told Newsweek.

Both candidates have been campaigning heavily in Philadelphia and the broader Delaware Valley.

President Trump just finished a televised town hall event in Philadelphia, while Kamala Harris campaigned in the city on Thursday for the Biden ticket.

While Eric Trump didn’t mention Philadelphia in his list of “radical left” cities, the theme of law and order is still playing out on a steady basis.

Earlier this week, U.S. Attorney Bill McSwain announced charges he would be bringing against two people he says should have been prosecuted with more vigor by Larry Krasner, the Philadelphia District Attorney. McSwain is a Trump appointee, while Krasner has oftentimes been lauded in media headlines as the most progressive district attorney in the nation.

“The staggering homicide and shooting rates in Philadelphia are proof that the district attorney’s radical experiment has failed,” McSwain said.