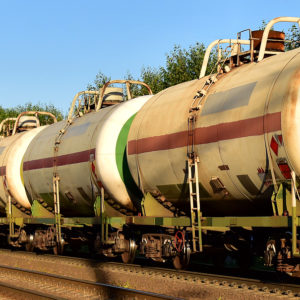 A small but passionate crowd of environmental activists delivered a petition to the U.S. Department of Transportation in Philadelphia Wednesday, demanding it prevent a flow of trains and tanker trucks carrying liquified natural gas through parts of Pennsylvania and New Jersey.

The Delaware Riverkeepers organization has long opposed what it calls “bomb trains” moving gas from fracking sites in Northcentral Pennsylvania to a proposed port in Gibbstown, N.J. From there the shipments will be exported overseas. Once the plan is in place, New Fortress Energy’s Gibbstown Logistics Center will be able to handle deliveries from several 100-car trains of liquified natural gas per day. That is the equivalent of 700 tractor-trailers. Trucks can also ship the gas from the Marcellus Shale to the port.

“The residents of our state are being subjected to a very dangerous project,” said James Stewart, who lives near the train terminus in National Park, N.J. “New Jersey will receive no benefit from this project. We are only guinea pigs for their dangerous proposals.”

The Riverkeepers press conference on Market Street drew about 20 people who yelled, “Stop the bomb trains!” and “Keep it in the ground!” between speakers.

The Trump administration granted New Fortress Energy a special permit to carry the gas and initiated a rulemaking to allow for more general transit. That general rule may now be in peril.

Regulators with the Pipelines and Hazardous Materials Safety Administration this week proposed suspending the rule pending more study of the safety risks. Officials said uncertainty about the rule kept companies from investing in special rail cars with enhanced outer tanks that are more resistant to punctures. Environmental groups have joined with 14 states, including New Jersey and Pennsylvania, in lawsuits to keep the rule from moving forward.

While there hasn’t been much historic demand for rail transport of liquified natural gas, the Association of American Railroads argues rail is much safer than trucks.

“Railroads continue to be the safest way to move hazardous materials over land with 99.99 percent of all hazmat shipments arriving at their destination without incident,” said association spokesperson Jessica Kahanek. “The rail industry remains confident that [the Department of Transportation’s] ongoing research will affirm that with the right precautions rail is a responsible transportation solution for moving [liquified natural gas] if their customers request it.”

Rescinding the rule would not affect the New Fortress permit, which expires Nov. 30.

A 2015 study by the Canada-based Frasier Institute concluded that “Both rail and pipelines are quite safe, but pipelines are without a doubt the safest way to transport oil and gas.

The Riverkeepers network has gone door-to-door informing people of the project that would send trains through highly populated areas of Allentown and Philadelphia and Camden, N.J. The group also noted in a press release issued after its event that New Fortress has yet to build an export dock and the permit hasn’t been used since it was issued in December 2019. Additionally, it said New Fortress has not applied to the Pipeline and Hazardous Materials Safety Administration to renew its permit, according to information the Riverkeepers obtained from a Freedom of Information Act request.

“We are asking President Biden with these thousands of petitions to recognize that this unjust permit must be permanently stopped – this potential catastrophe burdens everyone along the train route and only benefits greedy special interests,” said Tracy Carluccio, deputy director of the Delaware Riverkeeper Network. “This is an intolerable injustice being forced on our communities. Stop the fracked gas bomb trains through Philly and protect the people instead.”

Pennsylvania’s oil and natural gas industry supported 6.1 percent of the total jobs and 9.7 percent of the state’s gross domestic product (GDP) in 2019, according to a new study commissioned by the American Petroleum Institute (API).