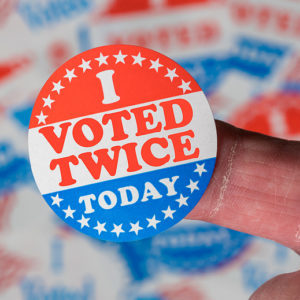 Election Fraud? This is Who You Call…

Pennsylvania seems certain to be the most watched state in the union for the 2020 election, not just for the final tally, but for the procedure of the vote as well.

It’s against this backdrop that the U.S. Attorney for the District of Eastern Pennsylvania William McSwain is promoting a hotline for anyone to report tips on election fraud or other suspicious voting activity.

“The Department of Justice will act promptly and aggressively to protect the integrity of the election process, but it is imperative that anyone with specific information about voter interference or election fraud report it immediately to my Office, the FBI, or the Civil Rights Division,” McSwain said.

In May, Domenick J. DeMuro, a former elections judge in Philadelphia pleaded guilty to taking bribes from an “unnamed political consultant” to stuff ballot boxes in the favor of certain candidates, sometimes including judges.

“DeMuro fraudulently stuffed the ballot box by literally standing in a voting booth and voting over and over, as fast as he could, while he thought the coast was clear,” McSwain’s office said.

In July, the stakes grew larger as McSwain announced a guilty plea from former U.S. Representative Michael “Ozzie” Myers, 77, of Philadelphia. Myers was revealed as the consultant who had bribed DeMuro.

“At Myers’ direction, Demuro would add these fraudulent votes to the totals during Election Day, and then would later falsely certify that the voting machine results were accurate,” McSwain’s office said. “Myers is also accused of directing Demuro to lie to investigators about the circumstances of the bribes and the ballot-stuffing scheme.”

The logistics of the vote in Pennsylvania is already a tense issue, especially given that this is the first major federal election since the General Assembly created “no-excuse absentee balloting” — which has essentially morphed into making the election vote-by-mail for anyone who wants to do so. In the June primary, many counties were unable to deal with the deluge of mailed ballots and the Department of State could not certify the vote until weeks later.

Democrats sued earlier in the year to expand voting access and won a huge victory when the Pennsylvania Supreme Court ruled that ballots postmarked by Election Day but received up to three days later must be counted.

Republicans then asked the U.S. Supreme Court to place a “stay” on that decision, meaning the order from the Pennsylvania Supreme Court would have no power. But the Supreme Court deadlocked in a 4-4 vote, leaving the original orders in place.

The whole episode has drawn national attention, especially given that a Trump re-election would seem to hinge on Pennsylvania, and the vote counting is certain to go on for days.

The conservative leaning Wall Street Journal editorial board slammed the decision, saying the U.S. Supreme Court will regret their inaction if Pennsylvania becomes the Florida of the 2000 election.

“Perhaps [Chief Justice John Roberts], concerned by Democratic attacks on the Court’s ‘legitimacy,’ is betting this problem will fizzle out,” the Journal wrote. “He had better hope so. If the ballot counting on Nov. 3 is close, the parties could soon be back knocking at the Chief Justice’s chambers. Then the stakes would be far higher, since a decision by the Justices could tip the outcome as millions of Americans watch.”

The voting controversies don’t stop there.

The Trump campaign has an appeal pending asking the Commonwealth Court to order that poll watchers be allowed into “satellite election offices” that Philadelphia created and has promoted as a get-out-the-vote tool.

Last week in Delaware County, Republicans lost a lawsuit seeking to bar the use of a “pop-up” voting site at Subaru Park in Chester.