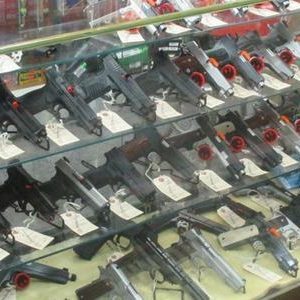 New social distancing requirements for gun stores means the long lines seen outside businesses over the past week will disappear.

But the retailers themselves will remain open after Pennsylvania Gov. Tom Wolf ended days of confusion over whether his order for non-essential businesses to close applied to gun stores and ammunition retailers.

Tuesday afternoon, Wolf released revised guidance that specifies businesses that sell firearms and ammunition can remain open, but only if they follow certain guidelines meant to inhibit the spread of the COVID-19 virus.

Concerns about the Second Amendment aren’t academic for many Pennsylvania residents in the Philadelphia area, where Police Commissioner Danielle Outlaw told her commanders to stop making arrests for nonviolent crimes including drug offenses, theft, and prostitution, among others.

Police will merely identify the suspects and make an incident report, leaving these potentially dangerous criminals on the street.

Gun stores will now be operating under limited hours and by appointment only, allowing employees to thoroughly clean and sanitize any needed areas between customers.

Jessica Keffer, the marketing manager at The Sportsman’s Shop in East Earl, Pennsylvania, says it’s not ideal, but it beats being shut down, which happened on Tuesday morning when members of the local police paid a visit to her store.

In a post on Facebook on Tuesday morning, Keffer explained that the shop had been in contact with its local state representative, David Zimmerman (R-Lancaster County), who told her it was his understanding that they were allowed to open. Not so, said the police officers who came by the store and ordered them to close.

Hours after Keffer posted the video from the closed store, Wolf released his revised guidelines, providing the clarity that Keffer and other firearms retailers have been demanding for days.

The governor’s new guidelines are almost identical to those proposed by several state supreme court justices in an opinion released late Sunday.

But three justices dissented, saying they were troubled by Wolf’s order and suggesting the governor could allow gun stores to continue to operate under certain conditions, including conducting only necessary portions of the transaction face-to-face and limiting occupancies of gun stores.

The dissent, authored by Justice David Wecht, expressed concern that the open-ended nature of Wolf’s order amounted to “an absolute and indefinite prohibition upon the acquisition of firearms by the citizens of this commonwealth — a result in clear tension with the Second Amendment to the U.S. Constitution.”

The new orders by the governor will result in a much smaller number of sales, but they will also allow stores like The Sportsman’s Shop to resupply as best they can. Every gun store in the state, and indeed the country, is operating on allocation right now.

That means stores can place an order for, say, 10,000 rounds of 9mm, but distributors can’t guarantee they’ll get that much. Instead, orders are being allocated to ensure every gun store gets something, though no one’s getting everything they need.

The issue is one of consumer demand, not any problem in the supply chain, but it’s definitely having an impact on the ability of gun shops to restock. Limiting store hours and occupancy may have the unintended effect of increasing the availability of firearms and ammunition in Pennsylvania over the next few weeks.

While Wolf has been no friend to gun owners during his time in office, he was wise to listen to Wecht’s advice and avoid a constitutional crisis.

Wolf has a tough job ahead of him, and there’s no reason for him to add to his troubles by trying to defend the indefensible; the complete deprivation of the right to acquire arms and ammunition for self-defense during a declared state of emergency.