In the early days of the COVID-19 pandemic, Pennsylvania Department of Health Secretary Dr. Rachel Levine repeatedly assured the public that protecting nursing home residents was the commonwealth’s top priority. “This is our most vulnerable population, and so we’re doing everything we can” to help those in long-term care facilities (LTCFs), she said on April 16.

But a trove of emails and other documents obtained by Delaware Valley Journal show that behind the scenes, advocates for the elderly were begging the Wolf administration for more help as the death rate kept climbing. In particular, they fought to separate COVID-positive residents from the rest of the LTCF population, comparing conditions to “a fire in dry grass.”

On Tuesday, President-elect Joe Biden tapped Levine to serve as assistant health secretary, which would make her the first out, transgender federal official to be confirmed by the United States Senate.

The state’s response was to hire ECRI, a “nonprofit organization improving the safety, quality, and cost-effectiveness of care,” according to the company’s website. But the resources supplied by the ECRI contract were so lacking that Montgomery County felt morally obligated to take matters into its own hands, creating their own teams to help facilities where at the time, more than 50 percent of all COVID-19 deaths were occurring in the state.

Data show Montgomery County’s response at the county level was equal to or surpassed ECRI’s help for the entire state in the first month. And nine months later, Pennsylvania continues to have one of the highest death rates among nursing home residents in the nation.

“Sorry to be a pain, but this is so wrong,” wrote Ann Torregrossa of the Pennsylvania Health Funders Collaborative.

“This is like a fire in dry grass unless we can test and separate infected staff and residents in long-term care facilities,” she continued to explain to Gov. Wolf’s deputy chief of staff slightly more than one month into the coronavirus crisis.

The deputy chief of staff, Alison Beam, forwarded the email to top officials in the Department of Health, including to Secretary Dr. Rachel Levine. “Just passing along external perspective,” Beam said.

Torregrossa’s email was one of several warnings sent directly to the Wolf administration and the Pennsylvania Department of Health five weeks after the governor first declared a statewide emergency in March, seeking better protections and more focused care for nursing homes, residents of LTCFs, and the staff who worked there.

“We have 12 million people in the state, and more than half are dying in nursing facilities?” Torregrossa implored. That was April 21. Other emails from the same day show Montgomery County was reaching out to the DOH to discuss the state’s nursing home response, and ECRI’s role.

One week earlier at a televised press conference, Levine tried to reassure the press that nursing home communities were being cared for as “our most vulnerable population,” and the department was doing “everything we can to protect them.”

On April 24, the Center for Advocacy for the Rights & Interests of the Elderly (CARIE) also wrote to Gov. Wolf, also asking for the creation of a response team immediately “to assess conditions in long-term care facilities,” in a detailed five-page letter.

“The Response Team should include, at a minimum, Long-Term Care Ombudsman staff, consumer advocates, representatives of public health agencies including epidemiologists, and regulatory agency officials including the Departments of Health and Human Services,” the CARIE letter explained.

“These teams should gather information on a continuing basis about both suspected and confirmed COVID-19 cases and fatalities, staffing levels and the availability of PPE and testing kits in facilities.” 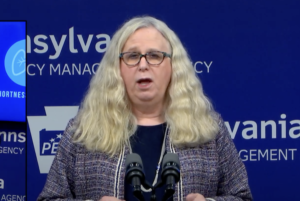 By that time, the DOH had been for several days boasting in press conferences it had hired ECRI. “We’re very proud of our staff and the ECRI staff for the consultations they have done,” Levine said on April 14.

But the ACLU countered that claim specifically.

“The decision to contract with ECRI to support facilities in their infection control efforts is a good first step, but it will not be enough to stem the wave of acute illness and death in these facilities,” the ACLU said.

Two weeks after the original CARIE letter, top representatives from that group told the Pennsylvania Senate that they received no response from the Wolf administration to its original request.

In Absence of Help, Montgomery County Creates Its Own Rapid Response Teams

A detailed breakdown of the deliverables for the $1 million ECRI contract shows only 60-70 percent of it went to helping LTCFs. The net result was five people available by phone and three other workers available to pick up loose calls on the weekends—a far cry from Torregrossa’s numerous “SWAT teams” or CARIE’s “rapid response” unit.

For comparison, Montgomery County Chairwoman Dr. Valerie Arkoosh told a state Senate policy panel in early May that their county had created its own “FAST” teams — Field Assessment and Support Teams: six teams of two people making in-person visits — once they realized they would not be getting “on-site assistance” that they assumed would be coming from DOH or ECRI.

“We conveyed our concerns [about LTCFs] to the Department of Health in a couple of phone calls,” Arkoosh told the senate policy committee. “DOH responded, I’m sure you’ve heard, they engaged a group called ECRI to help with some of the outreach to these facilities. We again mistakenly assumed that there would be some on-site assistance [from DOH] to some of these most highly impacted facilities.”

ECRI’s contract began ten days into April. For the remainder of that month, it performed 82 total telephone or “virtual” consultations, according to the DOH. From April 22 to May 22, Montgomery County performed 78 in-person consultations.

Montgomery’s response just within its own county was 50 percent better staffed than the DOH statewide response through ECRI, and nearly kept pace with the number of overall consultations. The county had trusted the DOH and ECRI response would be robust by having an in-person presence. Only after the extent of the state’s failure became apparent did Montgomery officials decide “the right thing to do [was] to try to take this on ourselves,” according to Arkoosh, ultimately leading to the creation of the FAST teams.

Requests for comment from Delaware Valley Journal were not returned from Torregrossa, ECRI, and the various stakeholders in CARIE.

The Department of Health responded to DVJ after publication, and said during the pandemic, nursing homes were also provided support from the DOH with quality assurance teams “who conduct onsite visits to facilities and investigate complaints and concerns related to the safety of residents” and healthcare associated infection teams which aim to “provided direct consultation with facilities experiencing outbreaks.”

“The work of ECRI was to complement the work of DOH. ECRI provided intensive support for facilities with highly complex outbreaks or with a need for comprehensive infection prevention and control guidance beyond what was typical,” said Maggi Barton, deputy press secretary with the DOH. “The number of consultations is not high, because ECRI consultation was very intensive; the ECRI teams often provided daily huddles, infection prevention and control education and hours of phone support for each facility over a period of weeks to months.”

When Toregrossa sent the first email, she noted that out of all COVID-19 deaths in the commonwealth, 51 percent came from LTCFs.

Months later at the end of 2020, that number would climb to 60 percent, making Pennsylvania the sixth worst state in terms of deaths in LTCFs according to an analysis by The New York Times. The Times also ranked the total deaths in each specific nursing home across the country, and six of the top 10 most deadly facilities were in Pennsylvania.

Some of the states in that data set who fared worse than Pennsylvania are in the northeast, like Rhode Island and Connecticut.

But many of Pennsylvania’s neighbors performed dramatically better. Compared to the 60 percent of statewide deaths coming from LTCFs, Maryland had only 50 percent, and New Jersey just 41 percent, although data reporting between states is not exactly an apples-to-apples comparison. Maryland Governor Larry Hogan created nursing home “strike teams” on April 9.

DOH has taken continual criticism over its decision to make nursing homes readmit patients who had been infected with COVID-19. Levine has taken personal heat over the fact that she helped her own mother move out of a LTCF and into a hotel early in the crisis.

When presented with that New York Times data, former state Senator Andrew Dinniman told Morning Call, “we should have focused our concern on where the most deaths were taking place, which was senior homes and long-term care facilities, instead of restaurants and businesses.”

Even at the May Senate policy meeting at which Arkoosh testified, Dinniman once exclaimed, “The department of health has failed our nursing homes!”

Although Pennsylvania ranked sixth worst in terms of nursing home deaths nationally at the end of December, new data has been added to the Times database. The state currently ranks 10th worst in the nation, with just over 50 percent of all COVID-19 related deaths coming from LTCFs. The Times data shows the percent of nursing home deaths is just over 50 percent as well.

After seeing the evidence in this report, Zach Shamberg, president of the Pennsylvania Health Care Association which represents hundreds of nursing homes, said LTCFs are still being disproportionately affected by the crisis.

“Even before the first case of COVID-19 was confirmed in long-term care in Pennsylvania, we knew the risks of failing to prioritize our most vulnerable, which is why we have continued to call on state officials to prioritize and collaborate with our providers and ensure access to critical resources to effectively mitigate the spread of COVID-19 in their facilities,” Shamberg told Delaware Valley Journal.