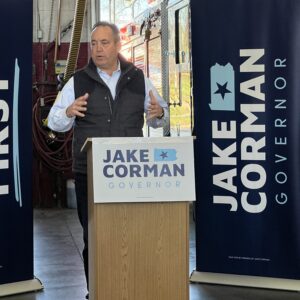 Senate Pro Tempore Jake Corman, a Republican who is running for governor in 2022, came to the Nottingham Fire Company in Bensalem Wednesday to speak with first responders.

“Volunteer fire companies save the state billions of dollars,” he said. “The pressure of getting more and more volunteers is difficult. It’s important for me to hear from them what they’re facing, what their challenges are.”

Corman, 57, who represents Centre, Mifflin, and Juniata counties, is the son of a state senator and has spent 22 years in Pennsylvania politics.

“This is not something I wanted to do growing up. I was a journalism major, believe it or not,” Corman told Delaware Valley Journal in a podcast interview. “And I wanted to be in sports broadcasting. And in 1994, my good friend, Rick Santorum, ran for the United States Senate.” 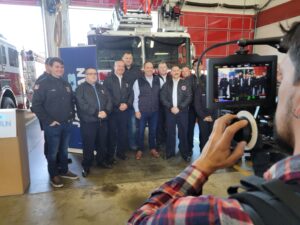 After Santorum won, Corman “got the political bug” and went to work for him as state director in central Pennsylvania.

With the slogan “People First,” Corman is running to get things done to help people.

He took some swipes at Democrat incumbent Gov. Tom Wolf, who is term-limited and will not be running again, for his handling of the COVID pandemic.

“He was wrong when at the beginning of the pandemic he shut down our healthcare facilities,” said Corman. That caused many people to forego needed tests like mammograms or have surgeries like hip replacements, according to Corman.

“And I said, ‘Governor, you know, this is a healthcare crisis. Hospitals were full of very smart people who are experts in the healthcare industry.’”

Corman also accused progressives of attacking the “very people who protect us,” citing Philadelphia’s surging homicide rate with more than 500 deaths this year. That trend, he said, is reflected in other parts of the state and across the country.

“And what did our governor do when all this was going on? He participated in a march and stood in front of a sign that said ‘Blue Lives Murder.’ That’s the type of leadership he chose to provide during this very difficult time. … The people of Pennsylvania don’t support that agenda. They don’t support defunding the police. They don’t support attacking the heroes of our community. I will stand with our men and women in uniform.”

Corman counts jobs and quality education as key parts of his platform.

“And I’ve led the charge against his policies and created better policies that have created jobs in the energy sector, which has created blue-collar jobs.”

Corman pointed to a new $6 billion natural gas to gasoline plant that will be built in Lucerne County that he supported but Wolf opposed. That plant will create about 4,000 temporary construction jobs and several hundred permanent jobs.

“The people who live in this community want policing more than anybody,” he said. “If you don’t stand up and say, ‘we need safe streets. We need to support our men and women in uniform,’ then you’re sending out a message that’s it’s not important. The crime that went on in some of our cities and no one prosecuted any of these people …You’re sending a message that what they’re doing is OK.”

Corman added, “We can support our men and women in uniform and still deal with the social concerns that drive some of those values,” he said. “I believe that we can have good energy jobs and still protect our environment. It’s a false choice to say it has to be one or the other. You can do both. You just have to be clever, you have to be creative.”

Education was a big issue driving many parents to the polls in the 2021 election cycle, as parents saw what their children were learning online during the pandemic.

“First of all, we have to be fighting back as a nation, not just a state, as a nation against Washington, D.C. and new Biden administration, sending the FBI out after parents who go to school board meetings and to have voices heard. That’s the most outrageous thing I think I’ve ever heard in my entire career, my entire life that our own country would be trying to silence voices.”

“We have to be encouraging parents to be involved in their children’s education,” he added.

Attorney General Josh Shapiro is the only announced Democrat in the governor’s race.