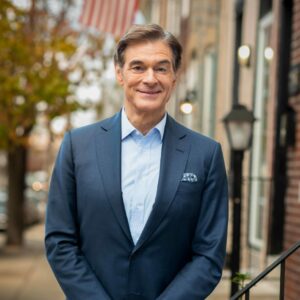 Now that Dr. Mehmet Oz has former President Donald Trump’s endorsement, he believes half of the Republican electorate will break his way with the remainder of the candidates divvying up the rest.

“There’s one person who is [the Trump candidate]: Dr. Oz,” said Oz in a podcast interview with the Delaware Valley Journal on Wednesday. “There’s five who aren’t. And those five people now have to split up the remaining half of the electorate. And most of those voters are going to vote for me anyway, because they know I’m going to win. And they want someone who has a bold, loud voice who goes to Washington — not as backbencher — but as someone who can articulate exactly why conservative ideas are better ideas.”

As for attack ads from hedge fund CEO David McCormick, who is vying for Oz for first place in the polls, or PACs supporting McCormick, Oz explained his years on television have given them plenty of bogus ammo.

“They never show footage of me saying what they’re claiming…There’s a reason for that. They’ll pick the promo of a show. Listen, I’ve had a network television show, the top health show in the world for 13 years,” the celebrity heart surgeon said.

Both Oz and McCormick angled for Trump’s endorsement. Oz said he received it because Trump “did his homework. He compared me to Dave McCormick and looked at the details of our records. Did we stand up for folks? Are we pro-Second Amendment, pro-life? Are we pro-American energy dominance? Are we tough on crime? Will we fight against the woke mob that wants to tear down much of what they think is our irredeemably stained society?

“And he decided I was the best person to carry that banner,” Oz said.

But what about the moderate Republican voters in the Delaware Valley suburbs?

“The Republicans that I speak to in the four counties, and I spend a lot of time in my home district…strongly believe in the conservative values espoused by the Trump administration. Yes, it made them uncomfortable to see some of the tweets. But as I make clear when you’re being attacked continually with a dishonest and far-left, liberal-leaning media, in many cases, you do get to become a bit of a porcupine and you need to have thick skin and the ability to punch back when people attack you.”

If the Republican primary voters pick Oz as their nominee he could very well be pitted against Lt. Gov. John Fetterman, a progressive who is leading in the polls on the Democratic side.

“We have all the resources we need that if we were able to harvest natural gas from out West or up North and pipe it through Philadelphia to where the Naval Yard used to be, and you can put it on ships. It would be a huge moneymaker for the city of Philadelphia (to) address our financial needs and help our allies stay safe from Russian or other toxic forces.”

And Fetterman has been a vocal proponent of legalizing recreational marijuana.

Oz, for his part, has no problem with medical marijuana but opposes legalizing pot for recreational use. Oz says he never tried marijuana himself, adding that as a doctor, he did not want to be impaired and unable to help his patients because he had gotten high.

“I have strong sentiments against the legalization of marijuana because we already have a problem with getting young people to work,” he said. “And if you build a psychological addiction, right, that tells people you can’t get through the day unless you smoke a joint, which is what Fetterman is saying is okay, we’re going to have even fewer people engaged in life and they lose their dignity when that happens.”

And, Oz spoke out against teaching young children about gender nonconformity.

“I’ve covered the topic of my show, 80 to 85 percent of kids who say they are transgender will naturally, if they’re not influenced, go back to their biological gender,” Oz said. “But if you change that natural history, if you place ideas in a 5-year-old kindergarten kid’s mind, then you’re going to mess with their mind. You’re not letting them do what kids have done throughout society. Once in a while, Johnny walks in mom’s shoes. It doesn’t mean anything. Love the child, embrace them, let them be who they need to be. And over time they work it out. If you interfere with that process, you hurt people.”