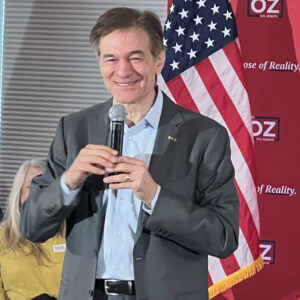 “What gets your blood pressure up?” he asked her.

“Politics,” she said, drawing laughter from the audience of about 200 who turned out to hear Oz speak. 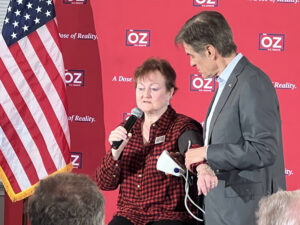 Cahaley says she is frustrated and worried for her kids and granddaughter.

“Everything is so wrong…We have to be able to think for ourselves,” she said, her voice breaking with emotion. “Believe in what we want. Believe in our freedom and our abilities. Or we’re going to be like Ukraine.”

Oz agreed. Ukraine “needs our assistance,” she continued. “Washington, where are you? They need your help.”

“It is emotional for all of us,” Oz replied.

When he travels to foreign countries, people often ask him to “please take care of America.” Oz told the crowd. His reply: “Why do you care?”

And they tell him America’s democracy is an example for their countries to emulate.

“We’re the north star for a lot of the world,” Oz said. “One of my concerns is China because China must destroy us.” The U.S. is democratic and capitalistic while China is “totalitarian, authoritarian.” 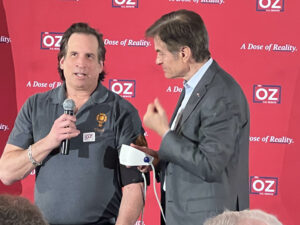 Michael Brown, who came to see the TV celebrity, said he is concerned Oz won’t be able to change what happens in Washington. He also worries about an education system where kids who are not athletes or academic stars feel “less than.”

Oz started a program, HealthCorps, to help schools, kids and parents. And when he was on the President’s Council for Sports, Fitness and Nutrition, he found there is a lack of coaches.

Brown agreed that his wrestling coach had been important to him. Oz said his high school football coach was his mentor, who gave him insight into how to be tough and persevere when things got rough.

“It’s come in handy in the operating room when things aren’t going well and they’re looking for leadership,” said Oz. “If you panic, you’re finished — and so is the patient.”

Oz touched on many of his positions during his talk, saying that he is pro-life and had operated on the tiny heart of an unborn baby. He also favors school choice and opposes critical race theory being taught in public schools, explaining that it is drawn from Marxist ideology.

Oz said he decided to run for office after seeing the “authoritarian” way the government handled the COVID pandemic, and how government and “big tech” combined to censor people from expressing differing points of view.

“Our nation is in crisis and it’s not right for me to hide in my (television) studio,” he said. “Which is a nice safe, sequestered place with a lot of people pampering me or to hide in the operating room, which for doctors is a very safe place to be, too, by the way.”

“Not for the patients,” he joked.

“What’s the point if I’m going to watch the world around me, a country I love dearly, what’s the point?” he said. America “did not have to take in my family.” His dad was a Turkish doctor who was recruited to come here in the 1950s when there was a physician shortage, Oz said.

America “gave us an unbelievable opportunity. It’s come time to pay that debt.”

During COVID he learned from doctors in other countries that an inexpensive malaria drug, hydroxychloroquine, might work. “And I was so excited. And then President Trump mentioned it,” he said.

“The media hated (Trump) so much that they didn’t want this to work. They rooted against hydroxychloroquine. Even today after two years, we don’t know if it works,” he said.

Oz aid he tried to fund a study of that drug, but former New York Gov. Andrew Cuomo quashed it.

On energy policy, Oz said the “Green New Deal will not work scientifically. Forget about policy. It’s not going to work…And we have to get the natural gas from under our feet, which we have more of than just about anybody on the planet, enough to power our nation for hundreds of years, and start using it. But we have nonpolitical people blocking that…activists prevent energy companies from putting safe and ecological pipelines through New York State to New England with natural gas from us. So guess where New Jersey and New England get their natural gas from? They import it.”

“They get oil from Russia when they don’t have enough, so we’re aiding and abetting our enemies and hurting ourselves, our national security, our energy independence goes away,” he said. “And no one thinks it’s a good idea for our country not to be able to protect itself with energy. Look what happened in Europe. The Germans gave up their nuclear plants because it was the woke thing to do. Now they have no energy. They have to trust the Russians. Bad move. Putin is able to hold them, hostage while invading those poor Ukrainians, who had nothing to do with this.”

Although Oz did not say much about the crisis in Ukraine at his West Chester event, he did discuss it with Fox host Sean Hannity. He described the humanitarian crisis, including children being treated for cancer who are sheltering in hospital basements.

“Putin is this murderous thug and he’s causing all kinds of consequences independent of the ones we’re seeing on TV,” Oz said. “I just don’t understand why we’re importing Russian oil. I do not know why Joe Biden did not bring it up in the State of the Union. It’s one of the reasons Putin feels enabled. He can’t believe his luck.”

Earlier polls showed Oz was the clear leader among the Republican candidates for Senate. However, a Franklin & Marshall poll released Thursday showed the top three candidates within a few points of each other. 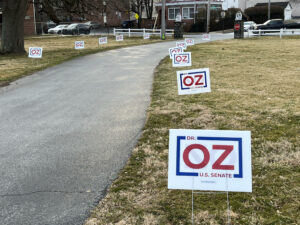 Kathy Luisi of Tredyffrin said, “I thought (Oz) was excellent.” She is the mother of adopted children and is pro-life. She also liked his support of school choice.

“I was impressed with him,” said Rhonda Holly of Glenmoore. “I like everything I heard.”