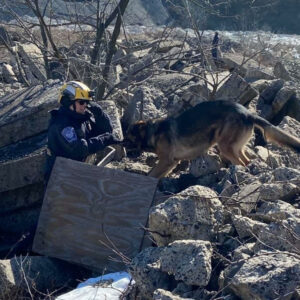 Deborah Shoener MacDonald and her German Shepherd, Zakk, can spring into action in a moment’s notice.

As members of a Federal Emergency Management Agency (FEMA) Urban Search & Rescue Team, they are on call 24/7. MacDonald, owner of Canine Academy in Penndel, keeps duffle bags of clothing and supplies packed since a call could come at any time.

One came shortly after a 13-story condominium collapsed in Surfside, Florida on June 24.  The body of the last of the 98 victims was found in the rubble on July 26.

It was only the second time MacDonald, who has been with the Philadelphia-based FEMA team for four years, went on a rescue mission with Zakk.

“Since I’m a civilian–some of the firemen, they’re used to maybe seeing someone that’s passed or maybe an EMT who goes into a building in Philadelphia and finds someone who had passed maybe five days ago. But being a civilian I’ve never seen anything like that, except family members. So, I didn’t know how I was going to react. But I am a very strong person and I thought I would be okay. And, I hate to say it didn’t affect me because it did. But I was able to handle it.”

Once it was clear no more survivors would be found, Zakk was no longer needed. But MacDonald continued doing various jobs to help the team, including sifting through the pile of the fallen building by hand. Team members worked 12-hour shifts and had to be decontaminated afterward.

MacDonald had a catch in her voice when she told of finding personal items buried in the rubble: A picture, a toy, a hairbrush, which were all that remained of people’s lives.

“You’d come up with a picture of somebody or a book, anything,” she said. “We were told to keep those things and put them in a bucket and they would sort them out so they can get them to family members. So it was very, very emotional. But I felt good about it. The harder I worked, the better I felt.”

Zakk is trained to find live humans, while other dogs are trained to find human remains, she explained. One dog cannot do both tasks because trainers would not want a dog to alert at a dead body and ignore a live person nearby who needed to be rescued.

“When you send your dog onto the pile, they have to bark for what we call an alert when they find a person,” she said. “They do the same thing when they find human remains…He might miss the live ones because he might find remains first. So, you don’t want that.” 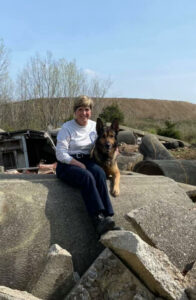 MacDonald has been training dogs for 47 years since she was in high school when the owner of a dog security agency hired her to help care for his dogs.

“I became his protégé,” she said. “He used to train police dogs for various police departments. And I opened my own business in 1983.”

“About 13 years ago, a client came in with his Labrador. He was with a fire department and wanted to make his dog a FEMA dog,” she said. “He needed help with obedience training. To be a FEMA dog, to get on the Philadelphia team, it needed training to pass certain certifications.”

MacDonald helped her client, Tom Brown, and thought Zakk might be able to become a FEMA dog, as well. Plus, she wanted to help people.  So she called Brown and asked how she could join the FEMA team.

“He said, ‘Come out and bring your dog and let’s see how it goes.’ So I brought him out one day and I stayed and a year later he was certified. Usually, it takes two to three years to certify a dog, but I certified him in a year because he had previous training and other aspects so it wasn’t too difficult for him to transfer (his skills) to search and rescue.”

She does not believe dogs get upset when they find a dead body.

“Dogs don’t take it personally as we do,” she said. “To them, it’s a job or it’s a game. You just have to make sure they’re getting rewarded.”

“The dogs, fortunately, do pretty well. They think it’s a game when they find somebody, whether alive or dead. We usually bring a ball and reward them,” she said.

During training, people are hidden in rubble and the dog must find them. Then the animal is rewarded.  But dogs can get discouraged if they never find anyone at a disaster scene, which happened during September 11th. So those trainers would have their dogs find a live person later in the day and then reward the dog, she said.

MacDonald and Zakk usually train with their FEMA team once a week.

“We like to go out and train and have fun with our team,” MacDonald said. “I like getting out there with my dog and practicing.”

Zakk lives with her at her Southampton home and is currently her only dog, although she is thinking about getting another one soon.

“Because I will eventually need a replacement and it may take me two years to train a puppy,” said MacDonald. She is also considering training her next dog to search and find human remains rather than live victims.

In addition to obedience training, MacDonald has trained dogs to find drugs and to track people from smells left by their footprints.