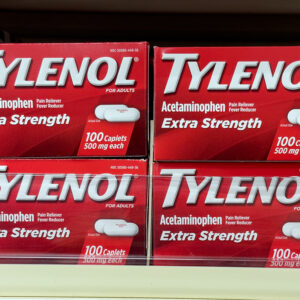 Karleen DeGroodt of Huntington Beach, Calif., was an ICU nurse when she was pregnant with her son Devyn. Working 12 to 16 hours a day, most of it on her feet, DeGroodt took acetaminophen several times a week for her aches and pains.

After all, it was one of the few pain meds recommended by her OB/GYN.

“I was handed a goodie bag and it had vitamins samples, snack bars, and a list of medications I could take, which included Tylenol, which is safe to use,” DeGroodt said.

Devyn was diagnosed with autism before his third birthday. “He was a very happy baby, but there just wasn’t that eye contact connection,” DeGroodt said.

Today, 14-year-old Devyn is nonverbal and relies on an iPad for communicating. And his mother wonders if the acetaminophen was the cause. It is a question more parents and healthcare professionals are asking: Is there a link between acetaminophen usage and an increase in autism spectrum disorder?

For Dr. Roberta Ness, a women’s health expert working with AutismJustice.com and the former Dean of the University of Texas School of Public Health, the answer is clear.

“I am absolutely convinced that it’s not only a link, but it’s a cause,” Ness said.

Ness points to a growing number of studies that indicate a link between the two.

In 2015, the FDA released a drug safety communication calling on additional research into acetaminophen usage during pregnancy.

A 2019 Johns Hopkins study funded by the National Institutes of Health concluded the results support earlier studies linking acetaminophen exposure in the womb with ADHD and ASD and called for additional research.

And now Nature’s Review Endocrinology has published a consensus of 91 scientists, clinicians, and public health professionals calling for 2015 FDA Drug Safety Communications recommendations to be updated in 2021.

The study cites a disturbing increase in the number of children with cognitive learning and behavioral problems.

The overall rate of developmental disabilities between 2009–2011 and 2015–2017 increased by 9.5 percent, according to the US National Health Interview Survey.

Dr. Ness, who served as an expert witness in the talc baby powder case against Johnson and Johnson, says that since 2015 an estimated 60,000 children have been born with autism due to acetaminophen exposure.

“I would say in the last seven years, the manufacturers, the FDA, OBGYNs have been or should have been aware of this evolving literature and how convincing it is,” Ness said. “None of them have done anything to alert the American public.”

“Since the genetics and environmental etiologies of autism and ADHD remain poorly understood, I would advise caution in linking Tylenol to causation or increased fetal risk,” Dr. DaCarla M. Albright, associate professor of clinical obstetrics and gynecology at the University of Pennsylvania School of Medicine told HealthyWomen.org.  “We have more to learn.”

In response to the consensus, The American College of Obstetricians and Gynecologists insisted that “the statement, and studies that have been conducted in the past, show no clear evidence that proves a direct relationship between the prudent use of acetaminophen during any trimester and fetal developmental issues.”

They continue to identify acetaminophen as safe for pain relief during pregnancy.

In an email, an FDA spokesperson stated that the research studies on acetaminophen published in the medical literature are “too limited to make any recommendations.”

“Because of this uncertainty, the use of pain medicines during pregnancy should be carefully considered,” an FDA spokesperson said. “We urge pregnant persons to always discuss all medicines with their health care professionals before using them.”

Dr. Ness believes prolonged use of acetaminophen during pregnancy could increase the risk of developing ASD between 50 percent to 70 percent.

“Those are really the women that we’re trying to get the message out to saying, just only take it for the shortest period of time that you can take it for at the lowest dose possible,” Ness. “I am not advocating that women walk around in pain just because they’re pregnant. What I’m saying is just be judicious about your use. Be aware, be judicious, and if possible, try alternative forms of pain control that are not in a pill.”

The A.J. Drexel Autism Institute in Philadelphia was founded 10 years ago as the nation’s first autism research center. Diana Schendel, Ph.D., a professor at the institute, said researchers there have not studied that particular question but have investigated other medications used in pregnancy and the risk for autism in the child, such as antidepressant use. There are many challenges to reaching a firm conclusion regarding the safety of medications in pregnancy. The studies looking at Tylenol and the risk for autism or ADHD are no different.

“One of the biggest challenges is teasing out whether it is the action of the medication itself that may be risky or is its characteristics of the pregnancy or the health of the woman taking the medication that has not been measured that may be the true risks,” said Schendel. “For example, there could be factors related to taking a large amount of medicine over a long time (versus taking only a small dose on rare occasions) that could be risky, but if those factors are not looked at in a study (or not measured well), then it is difficult to know for sure if the risk to the child came from the drug itself or from these others factors which weren’t measured.”

Now the issue is headed into the court system. A multidistrict litigation lawsuit has been filed, and in October 2022, it was certified that New York would house all Tylenol lawsuits filed in any federal court in the U.S.

The law firm of Miller and Zois expects over 100,000 victims will file a Tylenol autism lawsuit.

“I think what’s interesting about this acetaminophen lawsuit is, I think it’s going to be the straw that broke the camel’s back on all the issues in the world of autism,” DeGroodt said. “Imagine your child has been given a diagnosis, but nobody knows what to do. It’s then up to the parent to research and figure out what can help their child. If your child were diagnosed with cancer, that would never happen.”

For worried parents today, Schendel says the consensus statement from Nature Reviews Endocrinology summarized the situation well: there “may be a risk, but there are still uncertainties.”