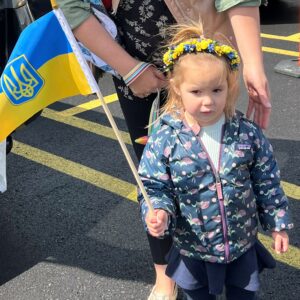 And many came with heavy hearts and worries about the war in Ukraine.

Stories of horrors perpetrated by the Russian invaders dominate the news. For those with family members and friends still in Ukraine, the worry about their safety is nearly unbearable. 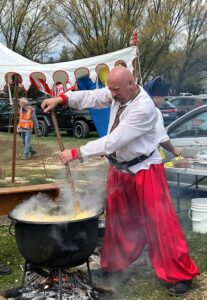 “I’m from Ukraine, so for me, it’s a disaster,” said Nadya Shakirova of Montgomery Township, who was at the bazaar with her children. “It’s unbelievably sad. There are no words to describe how painful it is.”

She came from Lviv in western Ukraine in 1999 and still has cousins there.

Lauren Hulayew brought her 2-year-old daughter, Kira, who clutched a Ukrainian flag, to the bazaar on Saturday. 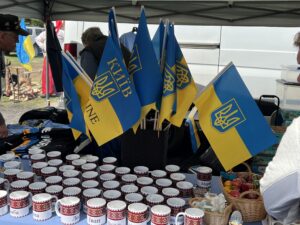 Vendors at the bazaar sold Ukrainian flags, T-shirts, and other clothing emblazed with Ukrainian mottos, like “Free Ukraine,” along with the traditional embroidered clothing Ukraine is known for. There was art, including the pysanky, decorated Ukrainian Easter eggs.

And Ukrainian delicacies were served including borscht, pierogis, kielbasa, and potato pancakes, along with tables full of desserts. Everywhere, one could hear conversations in Ukrainian. 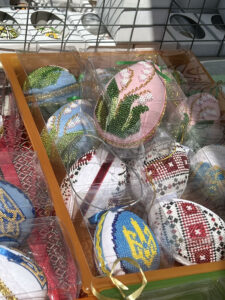 Christine Shwed said the Ukrainian National Women’s League has raised nearly $1 million for medical equipment for Ukrainians. She was manning a booth to sell books of Ukrainian fairy tales for the cause.

“We had to do something,” she said. “We couldn’t just stand by.”

Vera Bej, the former principal at the Saturday school at the UECC, said, “Everybody is doing something.”

Bej, who came to the U.S. as a child, said she still remembers what it was like under communism and the Soviet Union.

“I watched the old Soviet Union crumble and fall,” said Bej, a Shippensburg resident. As for the Russian invasion, she said, “I am shocked and astounded.”

Many people have been dropping off donations at the UECC, helping to box items to send to Ukraine, and for the 4 million refugees who have fled to neighboring countries. “People who don’t have a drop of Ukrainian blood” are helping, said Bej.

Larisa Kril, of North Wales, came to the U.S. when she was 30. The war actually began in 2014, “when Russia came and occupied Crimea,” she said. But Russians have been killing Ukrainians for 300 years, she noted.

Her son, Christopher Kril, 27, was also at the bazaar. 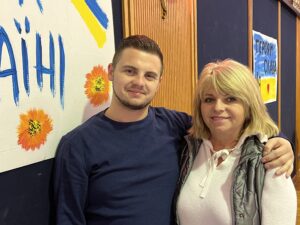 Christopher, who lives in Philadelphia and works at a credit union, said he would go to Ukraine every summer to visit his late grandmother, who lived in a small town in the western part of the country.

“It’s unbelievable, devastating, inhumane,” he said. “To imagine the streets that I walked in being blown up, dead bodies. That’s just really hard to imagine. I don’t know when I’ll be able to go back. So much beautiful architecture, so many years of history, lost. I hope the West and the U.S. help to rebuild Ukraine without Big Brother Russia.”

Bej said, “I feel guilty when I pray for my own family. I feel I shouldn’t ask for anything for them with what’s happening there.”

“It’s hard to tell Putin’s motives,” said the Strath Haven High School student. “It’s impossible to say what he will do with what’s happening now (with Ukrainian forces fighting and winning back some territory). It’s brutal.”