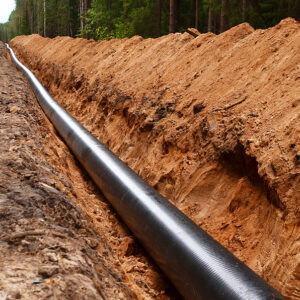 DEP Confirms: No Violations at Site of Water Runoff in West Whiteland

Groundwater runoff that flowed from a pipeline boring site near the Exton Square Mall may not be pretty, but multiple inspections found no environmental violations.

The incident began on Easter Sunday when groundwater started pouring out of Sonoco/Energy Transfer’s Mariner East 2 pipeline construction site. The water, discolored by particles of mud, made its way into a tributary to West Valley Creek.

According to state Sen. Carolyn Comitta (D-Chester), the response was almost immediate.

“My staff and I were in touch with DEP within minutes of being notified of potential issues at the site on Sunday (April 4). We have regularly followed up with DEP and the Chester County Conservation District to help ensure that best management practices are being followed under the law,” Comitta posted on her Facebook page.

The DEP report indicates the problem was “reported by site personnel.” The company maintains an environmental inspector on site at all times to monitor the filtration.

“Sunoco takes the water from the bore pit and puts it through filter bags placed in lined hay bales, then flows through compost filter sock before discharging it across a wetland area and into a tributary to Valley Creek,” the report states. “The water entering the tributary, and then flowing downstream into Valley Creek, is a bright orange color and appears to be composed of colloidal clay. At the time of this inspection, the pumping was in accordance with standard E&S control measures.”

The site was also inspected by the Chester County Conservation District. No violations were observed.

Still, having muddy groundwater pouring into nearby waterways is a problem. Energy Transfer has announced it’s expanding its filtration strategy to include flocculants, which help capture the extra fine clay particulates discoloring the water. And, the company reiterates, there’s nothing in this groundwater that’s harmful to the environment.

“All water management efforts at the Briar Road worksite have been approved by DEP,” company spokesperson Lisa Coleman told Delaware Valley Journal. “There has been no unpermitted water discharge from this worksite. The water leaving the site is colored because of the clay layer through which we are currently working. It is being filtered through approved erosion control measures. We expect the water to remain this color until we hit a different geology.”

Not surprisingly, opponents of the pipeline project are unsatisfied with the response. Some opponents are local residents unhappy about a large-scale construction project in their neighborhood. Others are anti-fossil-fuel activists who oppose all carbon energy infrastructure. They’ve pressured state and local regulators to step in and block the pipeline’s progress.

But for Joe Sofranko, Resource Conservationist at the Chester County Conservation District, the pipeline is “just another construction site.”

“We have to treat all construction sites equally,” he told DVJ. “Though this site probably gets a little more scrutiny given the nature of the project. But in terms of erosion control– it’s a construction site. That’s how I have to look at it.”

Sofranko says he understands local residents’ frustrations because they come with any large construction project. The county’s job, he says, is to protect the environment and the community while the work’s being done. But even when the Mariner East 2 pipeline, which is nearing completion, is done and under the ground, Sofranko doesn’t expect his workload to be any lighter.