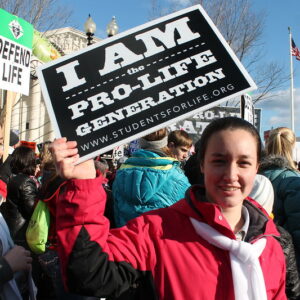 People around the Delaware Valley reacted to the U.S. Supreme Court decision Friday overturning Roe v. Wade, some grateful that fewer abortions will be performed and others angry that women’s ability to choose might be taken away, depending on where they live.

“Roe was always legally dubious. Returning it back to the states was important,” said Joe Rittenhouse on Facebook.

Abington resident Carol Gash said, “Thank God. Roe was poor legislation [sic] to begin with. I hope that my church will be okay,” referring to damage that was done to churches by leftist mobs after the decision was leaked earlier.

Fenecia Redman of Malvern said, “Who can be against stopping the dismemberment of babies?”

“It’s a disgrace and I hate it here,” said Lyndsey Brown, a Delaware County resident, via Facebook.

Carol Bassetti, a Cheltenham resident said, “I knew it was coming but now that it’s actually here, I’m speechless. I had so much admiration and respect for Ruth Bader Ginsburg, may she rest in peace. But I honestly believe she would have stepped down and made room for an Obama appointment had she had any idea this could or would happen.”

Helaine Dubner Zlotnick of Elkins Park said she did not want Roe to be overturned.

“I think there is an over-reaction about this,” Zlotnick said. “I will deal with this in my own way and not over-react. People are dealing with their emotions and not the facts. It’s always only ‘their’ way, can never find a balance.”

“I am enjoying the eft melting down today,’ said a Chesterbrook man, who asked that his name not be used. “They are probably making Molotov cocktails as I type. I can guarantee they are planning violence right now.”

John Featherman, a Republican who ran for Philadelphia mayor, said, “Before today, Pennsylvania’s governor’s race was seen by many voters as a referendum on vaccine/masking policies and, to a lesser extent, mail-in voting…But after today’s Supreme Court reversal of Roe v. Wade, abortion has risen to the forefront of the race for governor. And for Mastriano, this is bad news, as Josh Shapiro has already run a commercial in the past 24 hours that quotes Mastriano as saying, ‘My body, my choice is ridiculous nonsense.

“Roe is overturned but let’s be 100 percent clear, abortion care won’t end. Instead, access will become even more inequitable and dangerous. We must fight state by state to ensure this decision remains between a pregnant person and their doctor,” said Dr. Val Arkoosh, chair of the Montgomery County Commissioners and a Democrat, via Twitter.

“I am grateful to the justices of the Supreme Court of the United States for their willingness to hear Dobbs v. Jackson Women’s Health Organization, and for their opinion, which affirms the deep value inherent to every human life,” said the Most Reverend Nelson J. Pérez archbishop of Philadelphia. “As Catholics, we believe that life is God’s most precious gift and that we share a responsibility to uphold its beauty and sanctity from conception to natural death. In addition to being strong advocates for the unborn, this responsibility extends to caring for the hungry, the poor, the sick, the immigrant, the elderly, the oppressed, and any of our brothers and sisters who are marginalized. In short, to be truly pro-life means to recognize the presence of God in everyone and to care for them accordingly.”

State Sen. Steve Santarsiero (D-Bucks), said, “Today, and every day, I stand in support of a women’s right to make her own reproductive decisions and that includes access to a safe and legal abortion.  The Supreme Court’s ruling in Dobbs v. Jackson Women’s Health Organization has thrown out a fundamental constitutional protection for millions of Americans — one that has existed for nearly 50 years. This is unacceptable.”