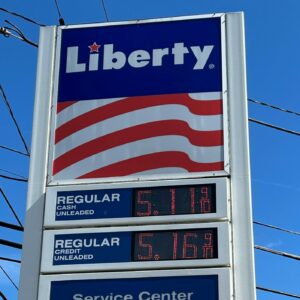 The AAA Mid-Atlantic reported Monday that Pennsylvania’s average gas price hit $4.95 per gallon, up a penny overnight and 19 cents more the last week. That is higher than the national average of $4.86, up 2 cents overnight and 25 cents in the last week.

In Philadelphia and the Delaware Valley, gas was averaging $5.05 Monday, up a penny overnight and up 21 cents in the last week.

“Trips to the shore will be cut,” said Doylestown resident Ted Taylor. “Casual drives on a Sunday won’t happen. Hope everyone who elected this administration is happy now. I’m not!”

“I am truly blessed,” said Sara Pilling of Bryn Mawr. “And wish I could say smart to have purchased a Prius Prime Plug-in the Saturday before the pandemic began. Currently, I’m getting 230 mpg and with conservative driving, I can go four to five months between fillings.”

Elkins Park resident Nikki Gaston said, “It won’t stop me from my daily travels (which are minimal). But I will not be taking any ‘day trips’ to the shore.”

Kristen Ann Albone of Ambler said, “I already am driving less and if I cut back anymore, I’ll have to give up eating in addition to preventative healthcare. Can’t wait to see the whining about all of the unintended consequences of these restrictions (to) domestic energy production and distribution.”

President Joe Biden and his administration continue to insist that high prices at the pump are due to “Putin’s Price Hike,” as the president put it over the weekend.

“I led the world to coordinate the largest release from global oil reserves in history, directed the sale of gasoline using homegrown biofuels this summer, and more. These actions have already helped to blunt what would have been an even larger Putin Price Hike,” Biden tweeted.

But a new ABC News/Ipsos poll shows just 27 percent of Americans approve of how Biden is handling high gas prices.

Meanwhile, Susan Cook (@CookieinPA) tweets, “Joe Biden stomped on our energy independence and being a net exporter of energy on DAY 1 OF HIS ADMINISTRATION. DAY 1! It has gotten progressively worse each day in office.”

Gary Thober (@gary_thober) said, “Our country was and could be again…energy independent. Instead we are led by progressive “Green New Dealers” and a career demagogue. This week in Gloucester….$100 for 15 gallons of diesel!”

And rickygotskills.crypto (@RixNotez) said, “Paid $5.01 at a Sam’s Club yesterday. The price of everything will increase to cover the expense of traveling and shipping goods. Excuse me while I generate some invoices…”

“My thoughts are not fit for public consumption. Let’s talk in July when gas is $7 a gallon,” fishopine (@fishopine) tweeted.