Lucca Ruggieri is the Executive Director and Chief Political Director at Patriot Polling. He is also a student at Great Valley High School.
News

Lucca Ruggieri might just be a junior at Chester County Great Valley High School, but he’s had an affinity for politics for at least a decade. As a little kid, he followed the 2012 presidential election and became more interested in electoral politics around the 2018 midterms.

He’s since interned at The University of Virginia’s Center for Politics, home of the election rating site Sabato’s Crystal Ball, and volunteered for Republican Dave McCormick’s 2022 Senate campaign. But now, he’s taking on a completely different role: pollster.

Ruggieri, with his partner Arhan Kaul, a junior at Montgomery County’s Spring-Ford Area High School, founded Patriot Polling this year. And despite being run by two teenage students, Patriot Polling’s data is being recognized by established polling gurus, with inclusion in FiveThirtyEight’s statistical analysis in this year’s elections.

Ruggieri serves as Patriot Polling’s executive and chief political director while Kaul holds the title of chief polling director. They got the idea for the firm during a train ride together into the city for The Germination Project’s summer fellowship program which looks to develop the skills of the next generation of leaders across the area. 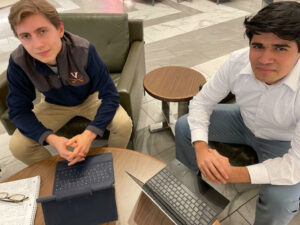 The two conversed about how polls have been unreliable over the last few election cycles and joked that even they could create polls that would be just as accurate. That joke turned into reality.

Patriot Polling’s data was far from perfect. Here in Pennsylvania, their data forecast Republican Mehmet Oz would win last month’s Senate race and Attorney General and Democrat Josh Shapiro would win the governor’s race by only 6 percent. But Oz went on to lose by 5 percent and Shapiro won by nearly 15 percent.

However, their final data wasn’t that off from what other pollsters found. And in fact, they nearly nailed other results, like their polls in the New York governor’s race and Georgia U.S. Senate runoff.

When beginning their polling journey early this fall, Kaul said he used the resources directly available to him to gain basic knowledge, like information from his AP Statistics and AP Government courses in school.

“That’s the two bigger things I could do to focus on using the resources I had,” he said. “I also did my own research on websites, and learned it’s more important to interpret data based on what you could actually see.”

When ready to poll a race the two have agreed on, they use a third-party system to conduct the calls. An automated system asks the questions they input to a large number of telephone numbers in the area they’re polling. Once that’s complete, the two weigh the data and then release it.

After their first few polls went public, a representative for FiveThirtyEight reached out to Ruggieri informing them they wanted to include Patriot Polling’s data in their polling averages and requested information to prove their data was real.

“When Lucca texted me, I was just kind of shocked,” Kaul said of his reaction to FiveThirtyEight reaching out. “This is, this is not something we set out to do… we just ended up there.”

Ruggieri said they both have developed a better understanding of its importance through entering the industry. Everyday voters are basing who they donate to, and potentially even who they vote for depending on their performance in them, on polls, Ruggieri said. And yet, their mild success proves that this isn’t an elite practice.

“It just shows no matter how established you are, you can just do as well as they did,” he said.

He added that even the big misses they had, particularly in Pennsylvania and Wisconsin, reflect this fact too. The rust belt, where those states are located, has been the most difficult region to poll of late, showing they also couldn’t escape this problem plaguing the industry.

For now, the pair are looking to keep their operation going. They’re planning on delving into national polls on President Joe Biden’s approval rating soon, and eventually polling the 2024 primaries.

“I don’t know if we’ll keep this going once we’re into college, but we’d like to keep this going for as long as possible,” Ruggieri said. “I think we’re doing good through doing this.”