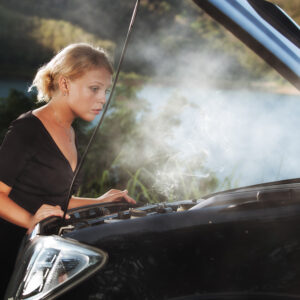 DelVal Drivers Are Feeling the Heat As Temperatures Soar

Heatwave season has arrived in the Delaware Valley, and that means it’s time to turn up the air conditioning, stay out of the sun, and make sure your car is in shape to handle it.

AAA says it has responded to “more than 10,000 member calls for assistance in the Philadelphia five-county area during the first three heat waves of the season.” Forty percent of those were for dead car batteries and flat tires.

With 595,000 residents in the Philadelphia area expected to travel this upcoming holiday weekend, concerns about cars breaking down on the road in the extreme heat are high.

Antoni added, “every time it changes from spring to summer I can always think of a three-day period where a lot of cars are dead on the road.”

“You definitely see a lot of air conditioning work,” said Glenn Lewis, owner of Lewis Automotive in West Chester. He added that he deals with many dead car batteries as well. “Batteries can’t handle hot weather.”

But these breakdowns don’t last the whole season. Lewis explained the parts that break down during these initial bursts of extreme weather are ones that already likely needed replacement. “If the battery was on its last leg coming into the first heatwave, it’s gonna go.”

“You might have a tire long past replacement, and just hanging on, but due to the increasing heat the negligence of the vehicle owner finally catches up to them,” said Antoni. “That’s the same with belts, air condition systems…  Just one hot day is the straw that breaks the camel’s back.”

Antoni said this initial hot burst gets vehicles needing repairs in shops and back on the road, limiting breakdowns for the rest of the season. But Lewis thinks there are problems that last through the entire summer.

“July through the middle of August is the hottest time,” said Lewis. “You still get failures with the batteries.”

AAA sees it that way too. “The effect this kind of weather can have on your car is cumulative,” Jana L. Tidwell, manager of public and government affairs at AAA Mid-Atlantic, said in a statement. “While many vehicles may survive this latest heatwave, motorists may not be so lucky as the summer rolls on.”

So, how can drivers avoid this fate? AAA suggests, “having car batteries and tires checked to ensure safety and prevent unexpected breakdowns,” according to Tidwell.

“As far as the battery, before any main hot or cold weather comes you want to get it checked early,” said Lewis. “Get the battery tested.” He added, “Keep the tire pressure up, the engine level full. You’ll stop a lot of problems in the future.”

Antoni voiced similar advice. “It’s really just preventive maintenance… We’re only required to have vehicle inspections once a year,” he explained. “That’s why it’s up to the vehicle owner to educate themselves and take a look.”

“You don’t have to be an expert to look at a tire, or a fan belt,” added Antoni. “If something doesn’t look right, chances are it has to be replaced.”