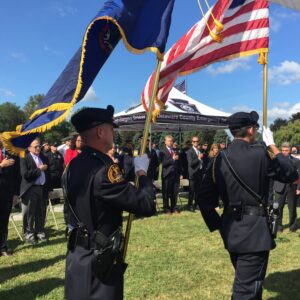 The pealing of bells. The laying of wreaths. Trembling voices sharing names of the dead.

Delaware Valley communities large and small marked the 20th anniversary of the 9/11 terrorist attacks over the weekend.

In Rose Tree Park on Friday, Delaware County officials, including U.S. Rep. Mary Gay Scanlon (D-Delaware Co.), spoke to a gathering that included many first responders under a bright, blue September sky that mirrored the sky on Sept. 11, 2001.

Delaware County Council President Brian Zidek was at work the morning of the attack.

“We’ll never forget that tragic day when almost 3,000 men, women, and children were taken from us in a cruel terrorist attack on our land,” Zidek said. “Some in our communities lost a loved one on that horrific day. Twenty years later the remains of these men are still being identified. Just this week, two more people were identified. We share our deepest condolences with their loved ones.”

Those who died that day included 343 firefighters, 71 police officers, and 55 military personnel, he said.

A friend of his worked in the World Trade Center and was in the second tower that was struck and could see the plane headed toward his office window. At the last minute it veered up and struck a higher floor, said Zidek.

“The building shuttered, lights were flickering, there was chaos and panic,” said Zidek. “The smell of jet fuel was overwhelming.” But people were told to stay and they did at first until a firefighter came to the office and escorted them down the stairs. “That fireman turned around and went back up,” said Zidek.  His friend got out but shortly afterward the tower went down and he knew that fireman did not survive.

Zidek thanked first responders for their dedication and sacrifice. 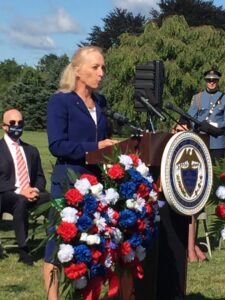 “Twenty years later, it still feels like yesterday,” said Scanlon. “It’s hard to realize this life-altering event that is so present for me and for so many of you here today, isn’t even a memory for an entire generation. It’s something they learn about in history books…We have an obligation to ensure that your younger generation not only knows what happened on Sept. 11, 2001, but that they truly understand the scale of the loss we endured, and the event impacted the trajectory of our nation.”

On Saturday, Montgomery County officials re-dedicated the 9/11 Memorial, now located in Eagleville, and honored those who lost their lives in the attacks 20 years ago, as well as those who have served on the frontlines of the COVID-19 pandemic. 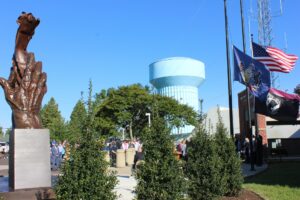 The 9/11 Memorial was commissioned by the county in 2003 and was designed and built by artist Sassona Norton to honor area victims and first responders. It was first installed in 2005, on the fourth anniversary of 9/11 at the courthouse plaza in Norristown.

The National Iron & Steel Heritage Museum held a ceremony called “Coatesville Remembers” near the trident from the World Trade Center that is displayed at its site.

U.S. Rep. Chrissy Houlahan (D-Chester Co.) said that everyone remembers where they were when 9/11 occurred. We remember the images of “the Twin Towers, the Pentagon, Shanksville,” she said. There were images of office workers rushing out and first responders rushing in “to save many.” 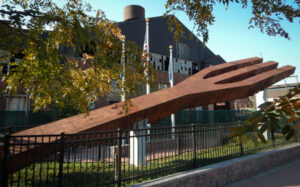 “We remember our common humanity and our shared loss,” she said. “We lost 2,977 people, some of whom are first responders…And we lost 7,057 to the War on Terror in the 20 years since. And many, many more to death by suicide related to these events.”

Villanova University held several events to mark the anniversary, including a talk by keynote speaker, Michael Benfante, a 9/11 survivor and author of “Reluctant Hero,” described that harrowing day, his struggles in its aftermath, and the lessons he learned. A stained glass window memorial in Villanova University’s Corr Hall Chapel, installed in Nov. 2006, offers a tribute to those who died in the attacks on Sept. 11, 2001 – including 15 Villanova alumni. The right panel of the window shows the World Trade Center buildings, the Pentagon, and the field near Shanksville. 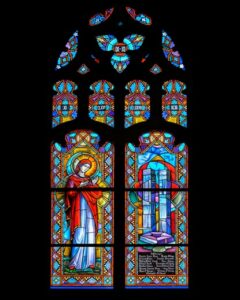 Prior to the start of Saturday’s home football game against Montclair State at James Work Memorial Stadium, a tribute was read saluting the victims of the attacks and the first responders who came to their aid, followed by a moment of silence.

Athletic Director Dave Duda noted everyone in attendance at Saturday’s game was impacted by the attacks in some fashion.

“I don’t think you can ever forget the amount of sacrifice, both with lives and recovery that were put into that. I think it’s the least that everyone can do today, across the country. 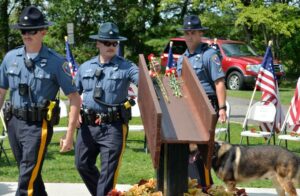 Officers pass by the 9/11 Memorial in Marcus Hook.

“We will never forget the events on Sept. 11, 2001, when we lost some of our own among the nearly 3,000 brave Americans who perished,” said Lower Chichester Chief of Police Tom Gaspari. “We are proud to have the 9/11 memorial here at the park and will continue to honor those lost from generation to generation.”

The memorial, featuring an 800-pound, 4-foot beam from the South Tower at the World Trade Center, was installed and dedicated 10 years ago. Lower Chichester Township was selected as one of 1,500 municipalities to receive a 9/11 artifact from more than 20,000 applicants.