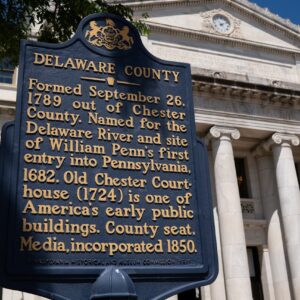 Delaware County’s legal bills for the use of outside attorneys and law firms totaled just shy of $2.3 million in 2021, marking the second year in a row that the county has topped the $2 million figure in that spending category, according to a data analysis by Broad + Liberty.

Both of the years mark a sharp contrast from 2019, when the last year of the Republican-controlled board of county council spent only $402,000.

The top recipients of the 2021 spending include:

By that analysis, two law firms, Eastburn and Gray, as well as McNees, Wallace & Nurick, both billed more to the county in 2021 than the county spent in total on outside legal help in 2019.

The county blames the escalating costs on new projects.

“Since January 1, 2020, Delaware County, and its Solicitor’s Office, have been involved in a wide ranging set of issues, most of which had not been addressed by the previous administration,” said County Solicitor Bill Martin.

“These matters include the acquisition via eminent domain, of the largest new County Park in history (Marple), a county-wide reassessment with associated litigation, litigation to block Aqua’s attempt to acquire DELCORA’s assets at bargain-basement prices, unprecedented litigation relating to the 2020 election, restructuring of close to a dozen union contracts, de-privatization of the GW Hill Jail, and addressing a crisis at the County’s Juvenile Detention facility.”

At least two of the top-ten billers have solid histories of giving to the Democratic Party in the region.

Ballard Spahr, for example, was a reliable contributor to Democratic candidates for the Pennsylvania House and Senate in 2020, though there were a couple outlier donations to Republican candidates.

Spahr is also deeply politically connected in Delaware County because U.S. Rep. Mary Gay Scanlon is a Ballard Spahr alumna, and her husband, Mark Stewart, is chairman of Ballard, according to a Bloomberg report. Scanlon’s district is largely based in Delaware County.

Frank Daly, of the eponymous law firm, has been a regular contributor to the Delaware County Democratic Party for years, usually making a donation of $84 at the end of every month.

Requests for comment to Ballard Spahr and Frank W. Daly & Associates were not returned.

The appearances created by political donations followed by contracts for county work for the donor was a hot topic to some of the new Democratic members of the board.

In a 2019 article in the Inquirer, Brian Zidek, the former chairman of the council who opted not to run for re-election last year, said residents in Delaware County paid directly from their own pocketbooks for political back scratching.

Councilor Brian Madden, still on the council, was included in the Inquirer story as well.

“Taxpayers in Delaware County pay a corruption tax,” Zidek told the Inquirer. “[Taxes] are too high, and the waste of money is the offshoot of the way this machine does business, with insiders, patronage, and no-bid contracts.”

“County Solicitor Martin’s skillful attempt to obfuscate the issue — which is the out-of-control spending of County Council — does not hold water,” Killion told Broad + Liberty. “The legal bills are the tip of the iceberg. When the bills are totaled up for all the new spending that County Council has implemented and the federal Covid money is spent, the public will be handed a massive tax increase.”

“As to the money being handed out the law firms, every other word out of Councilman Madden’s mouth during his election campaign was ‘corruption.’ He contended that County Council was rewarding its friends with contracts. Is Ballard a friend of the County Democrats? Congresswoman Scanlon’s husband is the chairman of the firm. Is Duane Morris a friend? The former Chairman of the Democrat party is of counsel. Hypocrisy is apparently acceptable conduct in the DELCO Democrat party.”

Still, Martin suggested that outsourcing some of the labor was a potential cost-saving move.

“It is also important to note  that the Solicitor’s Office has been streamlined,” he said. “In 2019, eighteen different individuals were on the County payroll as attorneys working in the solicitor’s office, receiving benefits, including the accruing of pensions. By 2022, this number had been reduced to seven.”

The numerous changes to the county’s governance have no doubt roiled the checkbook.

For example, the council voted recently to extend a contract to a firm recruiting new prison guards in the wake of the county moving the prison back to government management after being run privately for more than three decades.

“If the contract runs its full course, the county will have committed just shy of $1 million dollars — $925,425 — to help staff up the prison in the transition to deprivatization,” Broad + Liberty reported last month.

Yet at the same time, the county is also boasting it is implementing other cost-saving efficiencies.

But at the same time, that announcement was coupled with the news that, “Employees will be asked to contribute monthly towards these benefits, as officials explained this is in line with practices in surrounding counties.”

Update: This story was updated with a quote from Tom Killion.