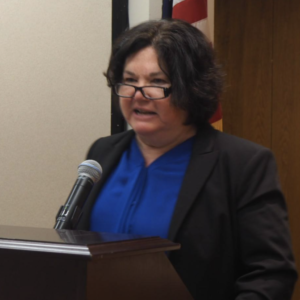 This article first appeared at Broad+Liberty.

A debate between the Delaware County Controller and the county council over proposed pay raises, vacation payouts, and the county’s budget situation has been quietly growing in recent months.

The issues land at a tumultuous time for the county, and not just because of the pandemic.

Delaware County Council is in the process of standing up a new health department from scratch, deprivatizing the county prison that it has not run in more than two decades, and, like many other municipal governments, is continuing to grapple with uncertain tax revenue.

The first evidence of the debate surfaced on Sept. 14 of last year when County Controller Joanne Phillips submitted a memo in advance of a personnel committee meeting, noting her “continuing objection” to proposed salary increases.

“Tomorrow, you will be considering an increase in the Public Relations Director’s salary by almost 18 percent,” from about $80,000 to $95,000, Phillips used as an example. “I continue to be concerned that the salary increases being approved by Council will further exacerbate pay disparity among people working for the County, lead to issues of fairness in compensation, and possibly lead to difficulty in meeting the County’s overall budget goals,” she wrote.

In December, the council held another meeting that included consideration of pay increases.  Phillips again raised objections, including to the proposed salary for a “commerce position” that “seems excessive.”

“A comparison of this level of compensation to our other directors who shoulder a lot of responsibility will reveal that this is a huge increase and great expense to the taxpayers,” she told the committee.

There was also discussion of “paying out vacation time,” during the December meeting. But none of the meeting’s minutes specify details about the proposition.

A county spokeswoman said the issue stems from time worked during the 2020 election.

“Because of the complexities resulting from the heavy use of mail-in ballots for the first time, staff were not able to use their vacation time and worked significant unpaid overtime,” county spokeswoman Adrienne Marofsky told Broad + Liberty. “Modest payments were approved to compensate.”

No further details about the vacation payouts were provided beyond that comment. However,  Phillips’ unease about the tactic continued into 2021.

“The Controller’s office is very concerned about setting bad precedent and the adverse impact this practice may have on the County expenses and on employee morale. Issues of fiscal responsibility and fairness are very much implicated, and we do not believe it is in the best interest of the County,” Phillips wrote just four days into the new year.

“With respect to all of the payments, I cannot help but view this through the lens of 2020,” she noted. “The County furloughed employees, and some were let go permanently. Our residents and businesses suffered economic stress.

“I am concerned about using our resources to pay out vacation time and bonuses that are not reimbursable by a grant or CARES money. Were these payments built into the budget for 2021?”

In the early part of the pandemic, the county temporarily furloughed 400 workers.

Although Marofsky said “modest payments were approved” through the vacation-pay proposal, Phillips told Broad + Liberty that the matter was not completely settled at the latest personnel meeting on March 17, and that the debates over these matters have always remained professional.

“I would convey to you that I appreciate that we were (and are) able to discuss the issue and that the Board hears my concerns,” Phillips told Broad + Liberty in an email.  “On a similar note, I said [Wednesday] night at the County Council meeting that I see it as a strength that this is a government where people can exchange ideas, disagree, work things out, and collectively and transparently arrive at the best result for the County.”

Also at the March meeting, a “Compensation Study was approved by County Council…and details are now being shared with County department heads and union leadership,” Marofsky said.

She added that the issue of how salaries would impact the budget have been smoothed out.

“The salaries approved by the Personnel Board over the last six months are appropriately aligned with both the results of the study and the County’s approved 2021 budget, which did not raise taxes,” Marofsky said.

The county did not voluntarily provide a copy of the compensation study, but instead requested that Broad + Liberty file a Right to Know Law request. That request has been filed and will be shared with our readership as soon as is practical.