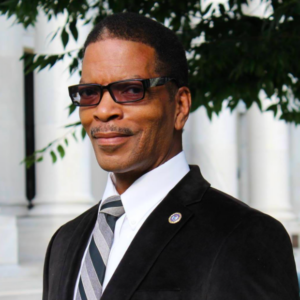 Delaware County Sheriff Jerry L. Sanders Jr. fired his gun twice while working for 23 years in the sheriff’s department in Philadelphia. Both times he was glad he missed.

In one incident, a homeless woman who hung out near his office began stalking him after he bought her two cups of coffee, then stopped. When he didn’t comply with her demands for more coffee, she vandalized his car with feces and jumped on it. She would stand on an overpass where she could see him through his office window. The other deputies thought it was funny and when he complained, the administration took no action, he said.

Later, at a hearing, he learned her children had died in a fire and she had been badly burned. The woman told the judge, “‘I meant to hit him. I meant to hit him with a brick,’ as her lawyer kept telling her, ‘Please, be quiet,’” Sanders said.

“And just to hear that standing there, I can’t imagine going through that with my children. I would probably lose my mind,” said Sanders. “I’m so happy that I missed her. And hearing her story, where would I be if I’d taken her life?”

The other shooting incident involved a burglary where officers saw some people breaking into a house, he said. He fired a shot.

“I think we arrested two of the three,” he said. But when he learned they were teenagers, he said he was also glad that he did not hit any of them. “You can be legally justified…and you know it’s not going to satisfy how you feel. The vacuum would hurt if you take a life.”

Sanders, a Democrat, was elected sheriff in 2017 and is running for another term.

Asked what he likes best about his job he replied, “The people.”

“I like my staff and they make the sheriff look good,” said Sanders, who runs a department with 51 deputies and a 2021 budget of $1.5 million, according to county records.

The deputies’ jobs are dangerous, he noted. They never know what they’ll run into when arresting someone on a warrant.

Sanders considers it a “major accomplish” that he secured a raise from about $13 an hour to $15 an hour for deputies. County Council “was composed of Democrats and Republicans. They came together and recognized their deputies were underpaid. And as a result, he said, the council also commissioned a study of all county employees’ salaries that was accepted in May.

“We went from zero to four in terms of deputies of color,” he said. And he believes that helps all Delaware County residents.

Earlier this year, “we had an incident where a woman came into the courthouse and collapsed as soon as she entered it,” said Sanders. No one could understand what the woman was saying. But when one of the new deputies, who is of Southeast Asian descent, came forward and spoke her language.

“She was the only one that understood what this woman was saying,” said Sanders. The deputy “was able to take her to a better place to comfort her and direct her to the proper agency within the courthouse for her concerns to be addressed. The woman was here to file a complaint from abuse, so it was domestic abuse…She was emotionally distraught.”

Having people of different backgrounds in the department “help’s the sheriff’s office better serve a diverse public,” he said.

Sanders said his office holds sheriff’s sales to satisfy tax liens on properties and also sales of properties that are in foreclosure where the property is sold to pay off a mortgage. In that case, the county receives fees. However, sales were stopped because of the COVID-19 pandemic from Feb. 2020 to April 2021. They’ve been held monthly since resuming.

Sometimes the office also handles personal property sales, where items are sold to pay off judgements, he said. These are ordered by the court, he said.

“Some property is exempt, such as a bed,” he said. “Some things are deemed necessities.”

Money from those sales does not go to the county but to the plaintiffs who are owed, he added.

While he is looking into technology for online sales, Sanders wants to continue to have the option of live sales.

“You know if we discover some shortcomings after the fact and I don’t want to discover a defect or shortcomings in sheriff sales after subjecting someone’s home to a sale,” he said. “I want to get the benefit of what other jurisdictions have learned that have used it.”

Sales of federal Housing and Urban Development (HUD) properties have also been on hold because of the pandemic but he expects those to start again soon.

Warrants were also on hold since the pandemic began.

“Full enforcement of bench warrants by the Sheriff’s Office has been curtailed during the pandemic,” said Chief Deputy Michael Donohue. “As an ongoing practice, the court, probation offices, pretrial services and the Domestic Relations Services continue to forward to our office for service bench warrants where such circumstances suggest immediate enforcement is needed. We also continue to pick up probation violations from the probation office and accept all in office surrenders.”

Donohue did not have statistics available for how many warrants the office serves most years.

In addition to their other duties, deputies guard the courts. They protect judges, victims’ families, defendants, and jurors.

Sometimes victims’ families do not feel the sentences given to defendants are harsh enough, Sanders said. And sometimes defendants’ families believe the opposite. So the deputy assigned to the courtroom must prevent altercations.

Sanders, the first Democrat and first African American elected to be the sheriff in Delaware County, rose through the ranks in the Philadelphia Sheriff’s Office to chief inspector. He holds a master’s in organizational development and leadership from Saint Joseph’s University.

Sanders and his wife, Juanita have lived in Delaware County for 26 years. The Drexel Hill residents are the parents of six children and eight grandchildren.