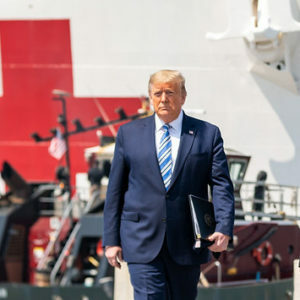 A Delaware County election worker filed a defamation lawsuit against former President Donald J. Trump, and several of his associates and supporters including former New York City mayor Rudy Giuliani, claiming he was harmed by remarks that Trump and the others made when they contended that Democrats stole the 2020 election.

In the lawsuit, filed in Common Pleas Court in Philadelphia, Chester resident James Savage alleges two Republican poll watchers accused him of uploading 50,000 votes for now-President Joe Biden with a USB stick. Savage said he “did nothing of the sort.”

“All defendants herein knew that such fraud was impossible,” the suit said.

Their remarks caused Savage to be threatened with physical violence, damaged his reputation, and caused him to suffer two heart attacks, according to the suit.

“According to the most recent tally from the Pennsylvania Department of State, on November 3, 2020, President Biden defeated Defendant Trump by 80,555 votes,” the suit said. The defendants “engaged in a perfidiously concerted and wicked plan to knowingly and intentionally publish hollow and/or false and/or baseless and/or vacuous claims of voter fraud, election fraud, and/or vote tampering, with the express purpose of creating mass political confusion and social unrest in the City of Philadelphia and/or the Commonwealth of Pennsylvania…and throughout the United States in general.”

The suit said statements made by the defendants “at or during the Gettysburg hearing, the Arlington Press Conference, the Hannity program and/or Fox News, and in any affidavit(s) attached…were knowingly false.”

“Donald Trump and Rudy Giuliani are no match for a dedicated public servant like Jim Savage and a Philadelphia lawyer,” said attorney J. Conor Corcoran, who represents Savage.

However, Trump was interviewed by AM 990 radio host Christ Stigall last week and spoke about the 2020 election.

“When I talk about the election fraud that took place in the 2020 race presidential election, don’t forget I got 75 million votes,” Trump said.  “When you get 75 million votes—I got 63 million the first time and somebody said, ‘How do you compare the first and second?’…Well, I did much better in the second…I got 12 million more votes and we did a much better job…The people came out and voted like they’ve never voted before. No sitting president has ever come close. We ended up losing.

“Look at Pennsylvania, what happened with the closing of the Philadelphia (election office), the stuff that took place, the vote counts with everything,” Trump said. “Pennsylvania is terrible. I would say Philadelphia and Detroit, Milwaukee also, three of the worst places for voting, the mail-in votes.  Philadelphia was horrible, what they did with the votes and the vote counting. Absolutely horrible…It was a disgrace.”

In the suit, Savage is demanding “$50,000 sufficient to fully compensate him, together with punitive damages, interest, costs of suit, and such further relief deemed equitable and just.”