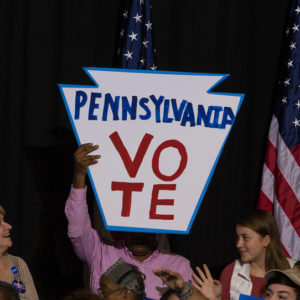 The Delaware County Board of Elections certified county results for the November 3 election, with the notable exception of a state House race that could not be certified due to a legal dispute.

Board Chairman Gerald Lawrence said a petition was filed late Friday contesting the tabulation of votes in nine precincts in House District 165, and the board received a judge’s order not to certify that race “just minutes” before the Monday morning meeting began.

With the exception of the outstanding House race, the morning scene from Media, PA, is expected to play itself out dozens of other times in counties across the commonwealth, culminating in the statewide certification of the vote that will make Democrat Joe Biden the winner of Pennsylvania’s 20 Electoral College votes for president.

Statewide certification of the vote has a clear path after a federal judge dismissed with prejudice the Trump campaign lawsuit that had been the president’s best hope in the state of somehow overturning the result that was presumed to be certified Monday.

Before certification, the Delaware County board listened to public comments submitted by email, most of which alleged irregularities and inconsistencies. Those allegations from the public were almost always based on hearsay or lacked evidence. Board members did try to answer all questions that involved some kind of first-hand experience.

The board also tackled a number of rumors and allegations circulated widely on the internet and social media, such as reports of missing “V-drives,” which are a kind of computer memory storage that works with the voting machines to tabulate votes.

The members did not deny that at some point — mainly in the 24 to 48 hours after Election Day — some of the V-drives were unaccounted for. But Lawrence said there are planned redundancies to the process that do not make any V-drive a standalone necessary piece of the tabulation puzzle.

“The V-card is nothing more than a thumb drive, if you will,” Lawrence said. “It’s a way to transport or deliver the information that’s recorded from the [ballot] scanner to the board of elections so that that information can be read and incorporated into reports to create the results.

“There is a separate hard drive that records all the information in the scanner at the end of the day. Even if we don’t get a V-card back, we go to the scanner, read the scanner, we can tell from the scanner how many votes were recorded,” Lawrence said, later calling the idea of missing V-drives a “non-issue.”

The three-member board, made up of two Democrats and one Republican, also addressed questions raised by a Delaware Valley Journal report of problems and inconsistencies with some recordkeeping items and largely showed those issues to be so minor they could not have changed the election outcome in any way.

The DVJ report pointed to an email from a county official that had indicated discrepancies between a secondary voter registration roll called the “yellow book,” which is kept by an election official called the “minority inspector.”

The yellow book is filled out by hand after the registration table announces the name of a voter who has just signed in. Two leaders of the elections team described how the process is frequently open to human error, particularly as Election Day wears on.

However, in one particular case, errors with the yellow book were so substantial that the issue was referred to the county district attorney for investigation. Officials said that incident was singular, and that voters should be encouraged that in those instances where the recordkeeping seemed suspect even on a minor issue, the matter was referred to the proper authorities.

Finally, Lawrence highlighted that the county had only about 400 ballots that were postmarked by Election Day but which were received after — ballots that would not have counted previously but now will be because of a ruling earlier this year by the state Supreme Court.

Lawrence pointed out that the 400 votes were a tiny fraction of the roughly 330,000 cast, and if all 400 of the ballots went for one candidate alone, it would not affect the outcome of any race either at the presidential level or any down-ticket.