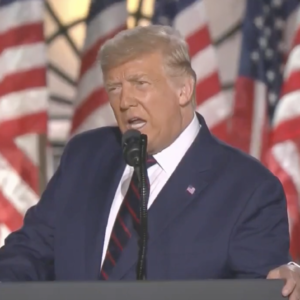 “Trump Hits Biden on Crime, Jobs” and “Trump Draws Stark Battle Lines” were just two of the national headlines from The Wall Street Journal and The Washington Post.

But if Republicans in the Delaware Valley were writing the headlines, you’d see words like “phenomenal,” “amazing,” “blown away,” and that the president “solidified his vision.”

President Trump capped the closing of the Republican National Convention by accepting the party’s nomination with a 78 minute speech from the White House south lawn, 26 minutes of which was applause from the assembled crowd.

Some 120 miles away in the Delaware Valley, the GOP faithful were busy applauding as well.

“I think he did [make an effective pitch.],” said Vicki Lightcap, mayor of Pennsburg in Montgomery County.

“I loved how he went through all of his accomplishments,” she continued. “And I will tell you, people I’ve been talking to, some of them were like, ‘I’m nervous.’ But I got to tell you since this convention has happened, they are more confident now, they are more energized, and they are more excited to get out and vote now.”

The tone of President Trump’s time in office has been a theme in the media ever since he began his campaign in 2015 from Trump Tower. And the Republicans who gave their rapid reaction to Delaware Valley Journal said the tone was a winner.

“Knowing friends who are moderate and maybe in the past have been put off by some of Trump’s tweets over the years, honestly were kind of expecting if a better Democrat came out [they] would have voted for the Democratic Party,” said William Hillman, an alternate delegate from Delaware County. “And the last couple of days the message I’ve gotten is that they’re coming back in the fold.”

“You know, a lot of people in suburbia have woken up to the President’s message,” said Vallerie Biancaniello, a delegate also from Delaware County. “You know I’m registering independents and Democrats to Republicans in record numbers. So, I disagree with that [notion that Republicans are losing in the suburbs]. I think more people are on the president’s side than ever because he is on the right side of history.”

The recent unrest in Kenosha, Wisconsin that unfolded simultaneously with the convention only served to highlight an urban versus suburban theme Trump has been trying to highlight for a month now. And with the election just 67 days away, it could have an impact, some political observers say.

“Looking at both his words and the speakers and the message, with all the rioting going on, it reinforces the idea that you can be both against police brutality and still be pro-civility and police,” Hillman said. “And that the offer that the Democrats are pushing at this point is to do away with law and order. Being pro law and order also means being against bad cops.”

“If Donald Trump wins, in a trustworthy vote, what’s happening this week in Kenosha, Wisconsin, will be one reason. Maybe the reason,” Joe Packer wrote in the left-leaning Atlantic Magazine the morning after Trump’s speech.

The president drew criticism several weeks back when he failed to answer a question from FOX News host Sean Hannity about what the agenda for his second term would be.

Ralph Wike, an alternate delegate from Delaware County, said the speech helped lay a foundation for the remainder of the campaign.

“I think that, especially towards the end of the speech, that President Trump solidified his vision and a positive message. When you outline your own intentions and directions you certainly gain more of a base than when you’re attacking your opponent.”