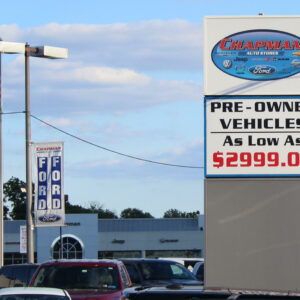 Consumers looking to purchase an automobile in the post-pandemic world are getting a nasty dose of sticker shock. Due to a global shortage of semiconductors, essential components that are part and parcel of today’s cars, fewer new ones are being manufactured.

Consequently, the demand for preowned vehicles has increased. To satisfy it, dealerships are stepping up their efforts to expand their inventories. Add it all up and the auto industry landscape looks quite different than it did recently.

Alex Frattaroli is the senior sales manager at Gateway Kia in Warrington and has worked in the auto industry for two decades.

“There’s a significant shortage of new cars because of the semiconductor issue,” he said. “So, we’re having a problem with respect to getting new cars, ordering new cars. They’re not producing them at the plants because of the semiconductor issue. We only have a handful (of new cars). It’s a crazy market that we’re in right now. I’ve never seen it like this.”

With new cars scarce, Frattaroli is employing a time-tested strategy to increase his inventory of preowned vehicles.

“We’re buying all the lease returns,” he said, “people are coming out of leases.”

The dealership is actively looking for preowned vehicles.

“(The vehicles) have to be less than five years old,” Frattaroli explained, “and have less than 60,000 miles on the car, and you get that 100,000-mile power train warranty. We’re able to swing some customers over to certified, preowned vehicles.”

Frattaroli says his situation is not unique.

“I have a lot of friends in the business,” he said. “All the dealers are doing the same thing.”

Frattaroli, who has been at Gateway Kia for eight years, says the dealership is utilizing other channels to satisfy the ongoing demand for preowned vehicles.

“People are going through a financial situation as a result of the pandemic that can longer afford to make their payments,” he said. “We’re buying those cars as well. We’re paying off those cars, refurbishing them, and selling them.”

But Frattaroli also points buying at auto auctions, traditionally a source of used cars, is not a viable solution at present.

“The auction prices, quite frankly, are through the roof,” he said. It’s not a feasible option.”

Anyone shopping for a car of late has doubtless noticed the increasing cost of purchasing one.  According to J.D. Power, the average price of a new car increased by 8.4 percent in the first quarter of 2021, to $37,200.

Frattaroli says the days of purchasing a car at the manufacturer’s suggested retail price are gone for the time being.

“We have an adjusted market value addendum on all our cars [and] that’s thousand above the MSRP to kind of control how many cars we sell,” he said. “If we were selling cars at the MSRP right now, we’d be in trouble.”

The cost of a preowned vehicle has skyrocketed as well. According to CarGurus, as much as 30 percent compared to last year.

As a result, Frattaroli and his sales team are offering incentives to consumers looking to trade in their used car, which might be up to $5,000 above the listed trade-in value.

How long will car prices remain at this level? Frattarol believes the situation will change when the semiconductor supply increases, which will enable manufacturers to produce more new cars.

“Once (semiconductors) become more available, I think everything will change,” he said.