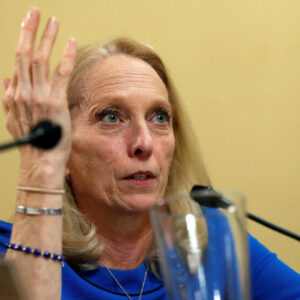 Even before President Joe Biden’s Tuesday announcement of a U.S. ban on Russian petroleum products, Delaware Valley Democrats were declaring their support for shutting down Putin’s pipeline into America’s economy.

Rep. Mary Gay Scanlon (D-Delaware County) said she believes stopping shipments of Russian oil headed to the United States is one way to support the Ukrainian people. “Ending our import of Russian oil would be a crushing blow to what remains of Putin’s war chest,” Scanlon told Delaware Valley Journal in a statement. “If the United States is to remain a beacon of freedom and democracy for the world, we cannot allow rising costs to deter us from doing what’s right.”

She and fellow Democrat Rep. Madeleine Dean (Montgomery County) attended a rally in support of the Ukrainian people Sunday at the Saints Peter and Paul Ukrainian Church in Bridgeport.

During Biden’s State of the Union address last week, he announced the collaborative release of 60 million barrels of oil–30 million from the United States alone–from petroleum reserves to stabilize the market and offset supply chain concerns.

While significant, that move does not offer a one-for-one replacement of Russian oil in the U.S. Speculation about buying more oil from other top-producing counties, such as Iran, Saudi Arabia, and Venezuela may hold promise but is unconfirmed. Some are calling on the administration to invest in domestic oil production.

The American Petroleum Institute has long advocated for greater dependence on American-produced oil. It says the United States isn’t heavily dependent on Russian oil due to logistical and infrastructure challenges.

“A majority of Russian oil imports are received by ports on the West Coast and East Coast where refiners lack sufficient pipeline connections to U.S. production regions,” explained a spokesperson. “Even without sanctions, U.S. refiners have ceased both contractual agreements with Russia and imports of Russian crude oil and products, making it very likely that the volume of imports from Russia is headed for zero if not there already.”

API maintains its message that one solution lies in ramping up domestic oil production in response to the Russian war in Ukraine. “Pennsylvania, the second-largest producer of natural gas in the nation, plays a pivotal role in supplying affordable, reliable energy across the country and around the world,” said Stephanie Catarino Wissman, Executive Director of API Pennsylvania.

The potential cost of a Russian oil ban on American consumers is not lost on congressional leaders. Congresswoman Scanlon acknowledged the impact the embargo would have on her constituents, saying, “The Biden administration and Congress remain laser-focused on bringing down energy costs for American families. We cannot complain about temporary inconveniences while the people of Ukraine are dying.”

Bucks County Congressman Brian Fitzpatrick (R) also supports a ban on Russian oil and has taken a lead position on the issue. Late last week, he co-sponsored a “bipartisan, bicameral bill” with West Virginia Sen. Joe Manchin (D) to ban Russian oil imports to the United States. During the press conference announcing the bill, Fitzpatrick explained his personal history with Ukraine, having been stationed there during his time in the FBI.

“There should not be a single dime, not a single cent, of taxpayer dollars funding Vladamir Putin’s murder machine,” Congressman Fitzpatrick said. “We need to do everything we can to make sure we stand behind [the Ukrainian people] unequivocally and unapologetically.”

Democrat Rep. Chrissy Houlahan (Chester County) also signed off on the legislation, and she praised Biden when he announced a ban on Russian petroleum products.

“To some, this might appear to be a difficult step to take. But I’m resolved to support it because I believe it is the right thing to do. We as Americans are guided by our values. As such, we cannot continue to import oil from Russia with funds that allow them to buy the ammunition and supplies they’re using to wage war on Ukraine.”

In 2021, the United States imported 670,000 barrels of oil per day from Russia. That’s roughly 8 percent of total U.S. oil imports for the year and 3 percent of total oil and petroleum products consumed in the country.

After Biden reversed his opposition, however, Dean announced her support.

“@POTUS, with bipartisan congressional support, rightfully banned Russian oil and gas – that funds Putin’s series of war crimes in Ukraine. We know this action will hurt at the pump, so we must be certain energy companies don’t price gouge and put people over profits,” Dean tweeted.