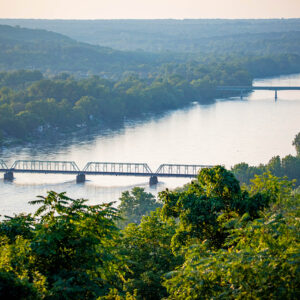 This article first appeared at Broad and Liberty.

Diane Louden, owner of Dave’s Sports Center in Doylestown has spent her whole life in the fishing industry. Her father, Dave, first started their family tackle shop in 1954 out of his love for the Delaware River, where he’s been fishing for American shad, yellow perch, and striped bass since he was a little boy. Now, at age 92, he comes into the store almost every day and still goes fishing in the river whenever he can.

“The Delaware River means everything to our customers,” Louden says. “I can’t even put it into words. It’s our lifeblood.”

According to the Delaware River Basin Commission (DRBC)—an agency created in 1961 by President Kennedy to manage water quality for the river and its tributaries—over 13.3 million people rely on the watershed for drinking water, in addition to its agricultural and industrial value. The river serves as a huge economic boon to the region, supporting over 190,000 maritime jobs and yielding around $85 billion in business revenue and personal income in the process. Boating and fishing, two popular forms of river-based recreation, are de rigueur to sustaining its economic success.

Recently, however, the DRBC has become embroiled in lawsuits after the commission voted in February to make a 2010 moratorium on “hydraulic fracturing,” or fracking, permanent in the basin. State Sens. Gene Yaw and Lisa Baker, the Pennsylvania Republican Caucus, and several local governments, including Wayne and Carbon counties, subsequently filed the lawsuits, claiming the ban illegally undermines their authority to govern natural resources.

The DRBC has become embroiled in lawsuits after the commission voted in February to make a 2010 moratorium on ‘hydraulic fracturing,’ or fracking, permanent in the basin.

“I hope these senators explain why residents of northeast Pennsylvania shouldn’t be allowed to use their property the way they want to,” said Matthew H. Haverstick, the lawyer for the Republicans. “And why they are so willing to surrender state sovereignty and legislative authority to an unelected bureaucracy?”

In response, 16 Democratic state senators signed a motion in U.S. District Court to intervene in the case, joining the Delaware Riverkeeper Network, an environmental advocacy group that has also filed to intervene. In a virtual press conference a few weeks ago, State Sen. Steve Santarsiero announced that Montgomery and Bucks County officials have also supported their intervention.

“The DRBC has continued its steadfast commitment to protecting the Delaware River Basin, as it was charged to do, and by doing so, has helped ensure our right as Pennsylvanians to clean water,” Sen. Santarsiero said. “Our position is strong, and I believe that the constitutional right all Pennsylvanians will be found to supersede the Republicans’ arguments for monetizing our natural resources.”

“We are not just here for ourselves; we are here to prepare the world for future generations,” said Diane Ellis-Marseglia, Chair of the Bucks County Board of Commissioners. “Natural resources, including the river, need not be destroyed for our grandchildren and their grandchildren by selfish covetous acts in 2021.”

Evidence on fracking has showed it can have deleterious effects on surrounding air, waterways, and ecosystems writ large. According to a report by the Delaware Riverkeeper Network, spills and toxic runoffs can harm aquifers and contaminate drinking water.

In 2020, Delaware River was named river of the year for its national success story. Only 75 years ago, it was choked with pollution, and parts of it were considered dead zones unable to support aquatic life. But over many years, it was able to recover thanks to legions of local groups collaborating to ensure it had adequate supplies, federal protections, and the enforcement of clean water safeguards.

For Louden, the safety and upkeep of the Delaware River is not a partisan issue. “I hear from customers all the time who say, ‘gosh, I hope that lawsuit doesn’t mess everything up.’ It’s not one for all. If everyone just did whatever they wanted with a natural resource where would the world be? Once you figure that out, everyone will be better off.”

But Stephanie Catarino Wissman, executive director of the American Petroleum Institute—Pennsylvania, penned an op-ed in which she says, “banning fracking ignores sound science in favor of a false choice between renewable energy and natural gas.

Today, more than 95% of U.S. natural gas and oil wells are developed using fracking. With the increase of natural gas consumption, particularly in power generation, the U.S. has reduced carbon dioxide emissions to their lowest levels in a generation.”

Louden’s shop is only ten minutes away from the river. On her daily commute, she passes through Frenchtown, New Jersey, where she often sees a couple of bald eagles flying and nesting.

“We have to maintain the best we can with what’s put on this earth, for people to enjoy it 50, 100 years from now.” 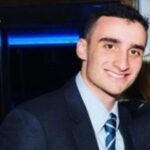 Ezra is a Philadelphia native and freelance reporter. You can follow his writings on Twitter at @SolwayEzra