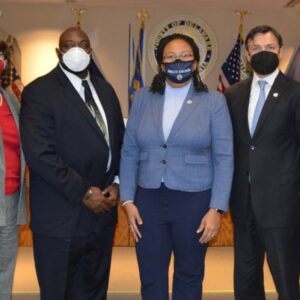 After the ceremony, the council held its reorganization meeting where Monica Taylor, Ph.D. was elected council chair and Elaine Paul Schaefer vice-chair. Taylor had served as vice-chair for the last two years.

The council is now the most diverse in the county’s history, with a female chair and vice-chair and two African American members.

Newcomer Womack was elected to a four-year term in November 2021. His prior government service includes representing Ward 2 on the Darby Township Board of Commissioners since 2009, where he was vice president of the board in 2015 and president in 2018. He also served as an advisor to the president for community and religious affairs for the National AFL-CIO.

Womack’s oath of office was administered by Magisterial District Judge Wilden H. Davis. He was introduced by his father, Richard Womack, Sr. presentation of the certificate of election was made by his daughter, Chantel Womack and a Bible was held by his granddaughter, Amiyah Porter-Womack.

Newly re-elected County Controller Joanne Phillips was also sworn in for a second four-year term. Her oath was administered by Common Pleas Court Judge Kelly D. Eckel and the introduction was by her sister, Carol L. Roberts. The presentation of the Certificate of Election was made by Phillips’ brother, James E. McPhillips, and the Bible she was sworn in on was held by Mary J. Walk, director of the Office of Judicial Support.

The invocation was given by Rev. Warren D. Mays, Sr., of the Second Baptist Church of Media. The Pledge of Allegiance was led by army veteran Maura A. “MO” Gillen and the national anthem was performed by Dean Fagiolo, a Media Theater Student.

Newly re-elected Councilman Kevin Madden, Sherriff Jerry Sanders, and Register of Wills Rachel Ezell Berry were sworn in during small private ceremonies prior to the public swearing in observance.