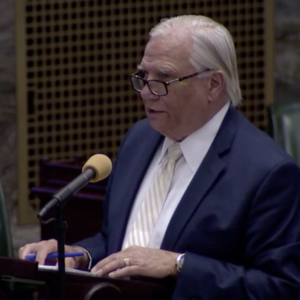 The resolution will now go back to the House for “concurrence” — a process making the two versions of the resolution agree. The original House version was only a partial repeal seeking to remove the governor’s regulation of businesses, such as which businesses were deemed “life sustaining.” However, the senate added an amendment making the resolution a full repeal.

There was small debate on the floor as to whether the governor has the power to veto, raising the possibility of a power struggle and possible legal battle.

Members of both parties claimed that if the disaster is terminated, Pennsylvania will be the only state in the nation without such a declaration.

Republicans argued that the governor had been vested with too many powers for too long, and that the resolution would restore a balance of power between equal branches of government. They also argued Wolf had “moved the goal posts” in establishing an infections metric for counties to meet in order to open, but then seemed to abruptly drop the criterion.

If any Democrat seemed likely to cross party lines and vote in favor, it was Chester County’s Sen. Andrew Dinniman, who called the vote a “difficult issue.”

“While I do not believe it’s the time to reopen Pennsylvania, I believe that the basic issue of how long any one individual can be in control without the other branches of government — the whole issue of the balance of power — is one of utmost importance to this commonwealth.”

At one point, Dinniman went so far as to say, “the criticisms [of the administration] are just.”

Sen. Katie Muth (D – Chester) said the resolution was “dangerous, impulsive” and threatened “vital resources.” For example, Muth said that cancelling the disaster declaration would mean the state could lose out on federal funding for the COVID-19 crisis such as additional unemployment insurance and assistance with purchasing personal protective equipment.

“Your freedom does not give you the right to put someone else at risk,” Muth said while urging others to vote no.

Republican Senator Bob Mensch of Chester County argued less about the balance of power and more about economics, but then took direct aim at Gov. Wolf by pointing to his recent attendance at a police protest that appeared to violate the state’s own health directives.

“We’re all familiar with the axiom, ‘Do as I say, not as I do,” Mensch said. “Is that the kind of leadership we want from a governor?”

State data shows the number of daily positive cases peaked on April 8 and have been on a gradual decline ever since. At the same time, the same state website shows daily testing has been increasing at the same time.

Yet even that data was a point of partisan argument. While Republicans said the decline in cases showed the state was capable of reopening, Democrats argued the cases were declining thanks to government orders and guidelines.