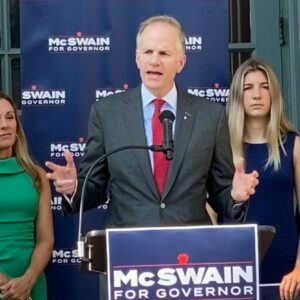 DeARMENT: Why I’m Voting for Bill McSwain for Governor

On May 17, Republican voters will nominate their candidate to face Democrat Josh Shapiro in the November election for Pennsylvania governor.

The GOP field is large, but for me, the choice is clear: I will be casting my ballot for former U.S. Attorney Bill McSwain.

If the last eight years under Gov. Wolf have taught us one thing, it’s that Pennsylvania families and businesses can’t afford another governor like Wolf. Since his first day in office, Wolf has tried to raise taxes on working families, penalize job creators, and keep kids stuck in failing schools to satisfy his teachers’ union donors.

When COVID hit, Wolf implemented some of the most draconian lockdowns in the nation, forcing countless businesses—including mine—to close their doors and putting millions of Pennsylvanians out of work.

At face value, on May 17 Republicans will select only their nominee to face Shapiro in the fall, but the truth is that depending on whom they vote for, they may also be unintentionally casting a vote for Shapiro.

Here’s what I mean:

Even though the national political climate shows Democrats are struggling, Pennsylvania remains a swing state. Democrats outnumber Republicans in voter registration (although the margin is shrinking), and for a Republican to win statewide, he or she must win not only Republican voters but also enough Democrats and independents to overcome the registration deficit.

Shapiro will enter the general election season in a strong political position. He has amassed more than $18 million so far for his campaign. And since he’s running unopposed in the Democrat primary, he will head into November with a huge campaign war chest.

This means if Republicans want to win, they must nominate a candidate who is strong enough to face Shapiro, peel away some of his Democrat voters, and win.

While the field of Republican candidates battling for the party’s nomination is large, the field of those who can actually do this is much, much smaller.

That’s because winning in November will require a forward-looking candidate who can raise money, connect with voters of both parties, and offer real leadership on the issues that matter to Pennsylvania families—issues like inflation, education, jobs, taxes, and crime.

Unfortunately, Republican candidate Doug Mastriano, who has been leading in the primary polls (second only to undecided voters), does not meet these standards.

Mastriano’s claim to fame is looking backwards and relitigating the 2020 presidential election. And his support of Act 77 created the use of controversial, no excuse mail-in ballots, resulting in highly contested results. While election integrity is a critical issue demanding attention, the 2020 election is done. The results are water over the dam, and continuing to focus on them is a sure-fire way to repel the swing voters needed to win.

Unfortunately, the nine-member GOP field means a candidate like Mastriano could win the primary election with less than 25 percent of the vote. This would be Shapiro’s dream come true.

Unless we want a continuation of Wolf’s disastrous policies, we can’t let this happen.

That’s why voting for former U.S. Attorney Bill McSwain in the Republican primary for governor is an easy choice for me

Not only does Bill McSwain have a stellar record of public service as both a U.S. Marine and a federal prosecutor, but he also has a forward-looking vision for Pennsylvania that will connect with voters across the political spectrum. Bill recognizes the need for election integrity and reform, but he’s not going to let the Democrats make the 2022 election about 2020 or Donald Trump. This election is about Pennsylvania and our future!

If Republicans want to elect a governor who reflects our values, it starts on May 17.  A vote for Doug Mastriano would be a vote for Josh Shapiro. That’s why I invite my fellow Republicans to join me in voting for Bill McSwain for governor.

Jon DeArment is President and CEO of CHANNELLOCK®, Member of the Board of Governors at the Manufacturer & Business Association, President of the Board of Directors of the Hand Tools Institute, and Trustee of Commonwealth Partners Chamber of Entrepreneurs.