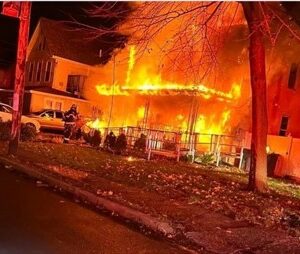 A house fire that took the life of a disabled woman is being investigated as arson.

Olivia Drasher, 20, died in the fire  One of her caregivers was injured.

The fire at 613 Sharon Avenue in Darby Township started at about 12:13 a.m. on Dec. 4. Arriving officers saw flames coming from the front porch area, and the fire quickly spread to the home’s second floor.

A person who managed to escape the fire told police that a woman with disabilities was trapped on the first floor. Officers made “numerous attempts to enter the property and rescue the woman but were unable to enter due to the intensity of the fire and smoke,” said Darby Police Chief Mike Sousa in a statement.

Firefighters searched the house and found the young woman’s body in the first-floor bedroom. The firefighters made “every heroic effort” to remove her but were unable to due to the heat from the inferno and the threat of the building collapsing, Sousa said.

After the blaze was extinguished, fire investigators began searching for its cause. During their investigation, they determined there was a “high probability” that the fire was arson.

After speaking with witnesses, police identified a suspect and took him into custody.

“He is currently being investigated for this evil act,” said Sousa. “At this time, the suspect is being housed at the county prison on unrelated charges.”

Sousa said they are not releasing any names “out of respect for the victim” at this time, but the investigation is continuing.

“Please keep the victim and her family in your prayers,” Sousa said.

The Drasher family has a GoFundMe account to help with expenses set up by Amira Rogers, an older sister.