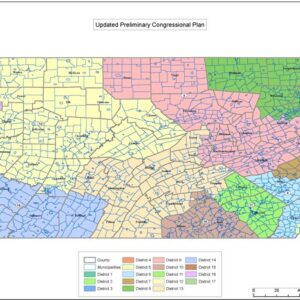 The citizen-drawn congressional redistricting map received a resounding endorsement when Commonwealth Court Judge Patricia McCullough recommended to the Pennsylvania Supreme Court that it be used in the upcoming election.

We couldn’t agree more with Judge McCullough’s decision on the map, introduced as House Bill 2146, and strongly urge the state’s highest court to follow her recommendation.

In her 228-page report, which critiqued all map submissions, McCullough wrote that the citizens’ map “meets all of the traditional criteria of the Free and Equal Elections Clause, and does so in respects even noted by the governor’s expert, as well as the other considerations noted by the courts, it compares favorably to all of the other maps submitted herein, including the 2018 redistricting map, it was drawn by a non-partisan good government citizen, subjected to the scrutiny of the people and duly amended, it creates a Democratic leaning map which underscores its partisan fairness and, otherwise, is a reflection of the ‘policies and preferences of the state, as expressed in statutory and constitutional provisions or in the reapportionment plans proposed by the state legislature.’”

The submissions included maps from the governor and House Democrats, neither of whom attempted to move their maps through the proper channels of the legislative process.

The history of the citizen-drawn map goes back to July 2021 when the House State Government Committee kicked off the most transparent, citizen-driven congressional redistricting process in the history of our Commonwealth with the first in a long series of hearings. Over the next few months, the committee went to the people all over the state to receive their input on congressional districts. It also opened the actual map-making to citizens and, in the end, selected a map drawn by Lehigh Valley resident Amanda Holt.

Unfortunately, Gov. Tom Wolf swiftly vetoed the map, even though he declined to take part in the Legislative-led redistricting process, after it was passed through the General Assembly.

We weren’t the only people to be left scratching our heads on why the governor vetoed the map. McCullough was also apparently puzzled, writing in her report “although Gov. Wolf vetoed House Bill 2146 and that bill never obtained the official status of a duly enacted statute, neither Wolf nor any other party herein has advanced any cognizable legal objection to the constitutionality of the congressional districts contained therein.”

The State Supreme Court has an opportunity to right the governor’s wrong and we truly hope the justices seize the opportunity.

Rep. Kerry Benninghoff is the Majority Leader of the Pennsylvania House of Representatives. He represents portions of Centre and Mifflin Counties.

Rep. Seth Grove represents the 196th District in the Pennsylvania General Assembly. He is the majority chairman of the House State Government Committee.