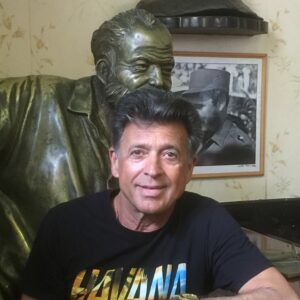 William Iezzi at the Floridita Bar in Havana with a statue of Ernest Hemmingway and a picture of Fidel Castro.
News

Local author William Iezzi has a message for all the Millennials and Gen-Zers romanticizing Fidel Castro, Che Guevara and the socialism of Cuba:

“You couldn’t survive there for one month.”

Iezzi, who has traveled to the island nation more than 70 times, thinks of Cuba as a second home. He’s watching with fear, fascination and concern as the Cuban people protest against the communist dictatorship that has ruled that country since 1959.

“I’ve developed an affinity with some of the families,” the Philadelphia resident said. “They’re very passionate people who live, subsist really, on small amounts of food. They don’t have much money. But somehow they survive and they survive with dignity.”

Iezzi has traveled to the island more than 70 times since 1977. His ties to Cuba inspired him to write “Armando’s Havana Loves,” a novel.

Back then, he was speaking to an actor friend about the movie, “The Godfather Part II” where a character Meyer Lansky (who was a real-life gangster), told fictional mobster Michael Corleone, “We’re bigger than U.S. Steel.”

“The mob had been running casinos in Havana and Corleone was supposed to buy in. He had $1 million in an attache case with him,” said Iezzi.  That conversation spurred the two friends to travel to Cuba by way of Cancun, taking a Soviet Aeroflot plane into Havana.

Just outside the hotel, Iezzi, who was a staff writer covering sports for The Philadelphia Inquirer, asked a local man who their best baseball player was.  That man told him, Orlando ‘EI Duque’ Hernandez and Iezzi asked if he knew where he could find him.

“He said, ‘We don’t know where he is because the government said he tried to escape, but I’ll look for him.” Then two days later, the man came back and told Iezzi that he had a car and driver and could take him to see Hernandez, who was being forced to work at a mental hospital, playing ball with the patients.

“I saw him about five times,” said Iezzi. During their last visit Hernandez asked Iezzi to help him to escape Cuba but Iezzi told him he had no way to do that. But later, Hernandez did manage to flee to the Bahamas.

“He wound up in the Caribbean World Series,” said Iezzi.  Scouts saw him there, and Hernandez signed with the New York Yankees for a four year, $6.6 million contract.

“Then he comes to Philly with the team and I called the hotel and got his girlfriend,” Iezzi said. He asked her if she remembered him and to speak with Hernandez.

“She said, ‘He’s sleeping. He’ll call you when he wakes up.’ I’m still waiting for that call.’”

“So that’s how the whole thing started,” said Iezzi. “I kept going back.”

He was writing for the Inky and magazines like “Cigar Aficionado,” and learned to speak Spanish along the way.

“I interviewed a lot of people and really developed an affection for the culture and the island,” he said. He’s stayed in touch with some Cubans he met on the island who’ve managed to come to the U.S.

When he learned about the demonstrations in Cuba on Sunday, he called an emigre friend, Alain De La Guardia, now living in Houston and asked him what he thought.

De La Guardia told him the Cuban soldiers are young, just 17, 18, 19. If they do not obey orders, the authorities say, they will not be able to go to university.

“They’re sent to the far regions of the island to keep the people in check,” said Iezzi. “Now, I’ve been to those small provinces and the police presence is stifling. They really, really control the people. In Havana, you have two million people so you can’t control them the way you can control the countryside.”

De La Guardia thinks the young troops, who make up 60 percent of the army, would lay down their weapons rather than shoot their fellow Cubans. However, history belies that rosy scenario. Cuba’s communist regimes have practiced bloody repression of their own people for 62 years.

“The people have no guns,” said Iezzi. “That’s the problem. It’s a police state and the police are everywhere.”

“I used to rent cars (in Cuba) and get pulled over all the time,” he said.  The police look for tourists, he said. “And the police would pull me over and say, “Uno momento,” asking for the rental agreement and my license. They would say, ‘You went through a red light’ when there was no light.” He would give them the documents with a $10 bill and the police officers would let him go.

When the Soviets pulled out of Cuba in 1991, the economy nearly collapsed. “Fidel (Castro) was forced to use American money. It must have really, really killed him to look at George Washington’s picture on the money.”

To revive the economy, Castro opened Cuba up to foreign tourists. Canadians and Europeans flooded in.

“And then he sent doctors to Venezuela in exchange for oil,” said Iezzi. “The doctors were paid but most of the money went to the government of Cuba.”

“Fidel was very clever,” said Iezzi. “I admire him for that.  I mean, I’m not a communist, but I admire him for his beliefs. He didn’t take the money and put it in a bank in Spain.”

One unique aspect of Cuba is the old classic cars everywhere due to the embargos against the communist regime. One guy that Iezzi interviewed made clutches in a chicken coop to repair the old Chevys.

“The chickens were running all around,” he said. Sometimes the mechanic “replaced the engines in these old cars with Russian engines. They have a Harley club, which is all Harleys from the 1960s, and they make their own parts for the Harley-Davidson motorcycles.”

Whenever he returns to Cuba, Iezzi brings supplies for the people he knows there, things Americans take for granted like medicines and eyeglasses.

As for the much-lauded Cuban healthcare and educational systems, Iezzi said, “When Fidel got cancer he didn’t stay in Cuba. He went to Spain. In Cuba, people who go to hospitals have their families stay with them and the family brings the food, water and whatever they need. The nurse supervises.”

Iezzi hopes to return again soon for research for a second book, but with the ongoing pandemic and now the civil unrest, he is uncertain when another trip would be possible.