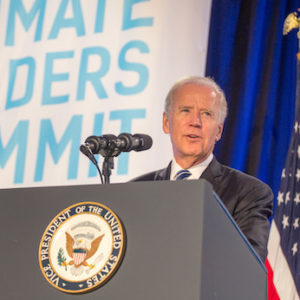 The U.S. middle class faces an existential crisis under a Biden-Harris administration and its promise to use the Green New Deal as the foundation for its energy policy.

That’s the verdict of three high-ranking elected officials who participated in a video call Thursday for an energy-focused nonprofit organization.

U.S. Sen. Ted Cruz (R-Texas), Nebraska Gov. Pete Ricketts, and Louisiana Attorney General Jeff Landry, all Republicans, spoke at length on the economic benefits of increasing energy production, as has happened under President Donald Trump, versus the essential shutdown of the sector that would occur should Joe Biden be elected.

“There is as sharp a divergence on energy as we have ever seen,” Cruz said. “Joe Biden let Alexandria Ocasio-Cortez write his energy plan. They will ban fracking. They will do everything they can from the federal government to shut down energy jobs, to shutdown oil and gas jobs, to make us dependent once again on hostile governments who don’t have America’s interests in mind.”

Indeed, Biden’s presidential campaign website states that he “believes the Green New Deal is a crucial framework for meeting the climate challenges we face.”

The call was hosted by The Empowerment Alliance (TEA), a nonprofit organization that started operations late last year to challenge the Green New Deal and promote natural gas. As a nonprofit, the group does not have to disclose its donors, but Executive Director Jim Nathanson told Politico last year that it plans to be “a significant factor in the 2020 election.”

The alliance is promoting its Declaration of Energy Independence, which states: “We, the undersigned, are committed to achieving the above goals and establishing America’s Energy Independence for the lasting good of our nation and future generations.” Cruz, Ricketts and Landry are among the notable signers.

The call focused on energy production as a job-creation engine, the ability of the sector to create wealth and prosperity for the middle class and energy independence as a crucial factor of national defense.

“When we no longer have to depend on oil coming out of the Persian Gulf and the Straits of Hormuz, that gives us more flexibility to deal with rogue nations like Iran,” Ricketts said.

Ricketts noted a California company making an enormous investment in Nebraska to produce carbon black — a material created by burning heavy oil — and used as filler in rubber tires and as pigment in plastics, paints and inks. Monolith plans to invest between $80 million and $100 million in an effort to produce 220,000 tons of carbon black by 2022 not by burning oil, but by using natural gas, which is abundant in Nebraska.

Creating an environment that allows the private sector to innovate will ultimately benefit workers, Ricketts said. But Biden’s energy policies would slam the brakes on that.

“The contrast here couldn’t be more stark,” he said, comparing Trump’s efforts to grow the sector to the estimated impact of the Green New Deal. “If we [go] down the path of what Democrats want to do, it’s going to hurt low-income Americans the worst.”

The Green New Deal began as a nonbinding resolution introduced by Ocasio-Cortez soon after she took office as a newly elected congressional representative from New York City.

The plan was widely panned after details such as providing a “living wage” to people who didn’t want to work and canceling cows since they create methane through their flatulence emerged. Nonetheless, the progressive wing of the party took up its mantle and it has become a litmus test for Democratic candidates.

Cruz said that former President Barack Obama’s administration had a “deep animosity” toward energy production, seeking to erect barriers to oil and natural gas exploration offshore and on federal lands.

“The AOCs and Bernie Sanders and Elizabeth Warrens of the [Democratic] Party who are now driving energy policy — they make Obama seem mild given their zealotry,” Cruz said.

Cruz’s harshest criticism was reserved for “idiot politicians” in New York who have stunted job creation by refusing to allow fracking in the state.

New York permanently banned fracking in the fiscal year 2021 budget. Meanwhile, Pennsylvania and other states that have tapped into the Marcellus Shale, which also runs under New York, have seen booms in job creation and increased median incomes for workers directly and indirectly connected to the natural gas industry.

“Part of being a First World Country is actually having electricity,” Cruz said. “What does it say that California can’t provide air conditioning because their policies are such a disaster? And what does Biden say? Let’s take the disastrous policies of California and take them nationwide.”