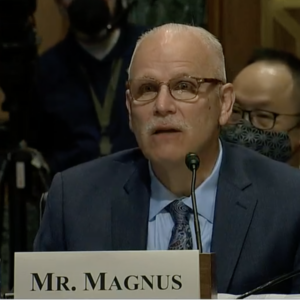 While the debate over sanctuary cities and migration made the headlines, President Joe Biden’s nominee to be America’s top border cop used his recent appearance before the Senate Finance Committee to call out a country far from the border for its role in counterfeit goods and illegal drugs: China.

Tucson Police Chief Chris Magnus, nominated to lead the Customs and Border Protection Agency, was questioned about the trade and commerce aspects of his duties by committee members, including Pennsylvania Senators Bob Casey and Pat Toomey.

“U.S. Customs and Border Protection has an important role in disrupting international drug smuggling operations and interdicting the flow of drugs and money across the U.S. border,” Hassan said, noting that opioid addiction “is ravaging my state of New Hampshire.”

Asked what he would do as CBP director to fight international drug trafficking, Magnus said he was well aware of the problem of fake pharmaceuticals, particularly those made with fentanyl and other opioids, and he pointed a finger at China.

“We should touch on e-commerce, where we know that there are many opioids and precursors of such that are coming through in small packages,” Magnus said. “Many times through the Postal Service because of relationships that are complicated involving China.

“There are a whole series of ways in which we can do more to address the scourge.”

“China remains the primary source of fentanyl and fentanyl-related substances trafficked through international mail and express consignment operations environment, as well as the main source for all fentanyl-related substances trafficked into the United States,” according to the U.S. Drug Enforcement Agency (DEA).  The danger from these drugs, which have migrated to mainstream e-commerce sites like Amazon and eBay, has become so great the agency issued a rare public alert last month.

“The Drug Enforcement Administration warns the American public of the alarming increase in the lethality and availability of fake prescription pills containing fentanyl and methamphetamine,” the alert reads. “International and domestic criminal drug networks are mass-producing fake pills, falsely marketing them as legitimate prescription pills, and killing unsuspecting Americans.”

“DEA laboratory testing further reveals that today, two out of every five pills with fentanyl contain a potentially lethal dose.”

Meanwhile, the U.S. Chamber of Commerce estimates China is the source of 86 percent of the world’s counterfeit goods, much of it shipped directly to customers in the United States.

The problem of e-commerce counterfeiting has gotten so big that private businesses are banding together to network with law enforcement in the fight. One organization, United to Safeguard America from Illegal Trade (USA-IT), recently hosted a roundtable on “The Dark Side of Cybercrime” to help warn businesses and consumers of the dangers.

“Most of these counterfeit goods aren’t made in America. They’re made in China and Asia, and they’re transiting around the globe to come into the U.S.,” said Matt Albence, spokesperson for USA-IT and a former acting director of the Immigration and Customs Enforcement agency. “And a lot of it now comes through the mail — UPS, the Postal Service, DHL. There are all sorts of vulnerabilities in the supply chain, and these are areas where law enforcement and corporate America are investing in security.”

And whether it’s counterfeit medications or fake drugs laced with fentanyl, Albence added, the funds from this e-commerce trade often go to criminal gangs and terrorist organizations, like Hezbollah, ISIS, and Al Qaeda as well as drug cartels.

“It’s not just a loss to our economy. The public safety and national security implications from this illegal trade are quite dangerous,” Albence said.

Magnus pledged to collaborate with state and local law enforcement to fight the flow of drugs, but he also said new technology is required.

But, Albence said, with China so deeply embedded in the supply chain and e-commerce becoming such an integral part of the U.S. economy, “there’s only so much law enforcement can do.”