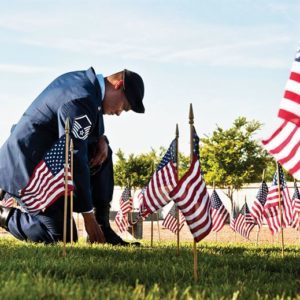 Counterpoint: This Memorial Day, COVID-19 Will Force Us to Stay Home; Maybe That’s a Good Thing

Editor’s Note: For another viewpoint, see Point: Memorial Day Is Not for Sale

Dust off your water skis because summer has begun!

Clean your grills for fresh burgers and dogs — the neighbors are coming over! Get down to the stores for the big sales for new cars, furniture and TVs! Put on your Uncle Sam hat and wave your mini flag — the parade is about to come down Main Street!

The COVID-19 “stay-at-home” orders will affect most of us this Memorial Day, and maybe that’s a good thing. Though Americans may share salutations of “Happy Memorial Day!,” the last Monday in May ought to be a serious affair — a living remembrance of our nation’s fallen.

Originally called “Decoration Day,” Memorial Day — which only became a federal holiday in 1971 — was a special day in spring for families of the fallen Civil War dead to decorate graves and hold gatherings to recognize the 600,000-plus men who died in the war.

Some historical accounts describe that the first Memorial Day commemoration was held by a group of freed slaves in South Carolina, only a month after the confederacy fell in 1865.

The following year in 1866, citizens of the small town of Waterloo, New York, shuttered their businesses, placed all flags at half-staff, draped the town in black, and held processions to each of the village’s three cemeteries to recognize and grieve their Civil War dead.

They continued this tradition every subsequent year, and, in 1966, the U.S. Congress declared Waterloo “the birthplace of Memorial Day.” Perhaps most interestingly, all shops were closed — a far cry from this century’s tributes to consumerism frequently held on the last Monday in May.

In this century, though many people still visit cemeteries to lay flowers on the grave of a loved one, or march in a local parade dressed in a timeworn military uniform, many Americans celebrate by throwing a summer party, by taking advantage of the sales — with no thought of “social distancing.”

The many restrictions due to COVID-19 have stripped the “happy” from our Memorial Day, perhaps reminding us that without neighborhood barbecues and retail bonanzas, the day is really about what the small town of Waterloo began.

Arlington National Cemetery will remain closed to the general public this year, though immediate family will be offered limited visitation. My husband, who is in his 25th year of service as an Army officer, was hoping to visit his father.

Buried at Arlington, my father-in-law Kevin Burke was an armored cavalry platoon leader during Vietnam. For his valor, he was awarded the Silver Star; for his injuries, two Purple Hearts. Rather than pay tribute at his headstone with the typical teaming crowds at Arlington, we will remember him at home, tell stories to our children, and say a prayer.

Perhaps these quiet, lonely reflections on those who served and died for our country are the purest form of a Memorial Day “celebration.”

Before these various Memorial Day traditions ever began, President Abraham Lincoln delivered the Gettysburg Address on November 19, 1963, as part of a ceremony honoring the soldiers killed during the Battle of Gettysburg earlier in July and later interned at Gettysburg National Cemetery.

In the three-day battle, the Union lost 23,000 men and the Confederates lost more than 28,000. During the speech, Lincoln’s assistant secretary, John Hay, observed the president as “sad, mournful, almost haggard.” Though the battle was a victory for the Union, Lincoln’s address had no such tinge of triumphalism. It was deliberate grief for the valiant service of the dead:

“But, in a larger sense, we can not dedicate — we cannot consecrate — we can not hallow — this ground. The brave men, living and dead, who struggled here, have consecrated it, far above our poor power to add or detract. The world will little note, nor long remember what we say here, but it can never forget what they did here. It is for us the living, rather, to be dedicated here to the unfinished work which they who fought here have thus far so nobly advanced.”

The silver lining of our quarantines, our solitude, and our adherence to stay-at-home orders is that this Monday may be full of thoughtful memories, solemn tributes and quiet commemorations — an acknowledgement of sacrifice rather than a frenzied dash to the local big box stores.

This year, the shadow of COVID-19 gives us the opportunity to remember “those who here gave their lives that that nation might live.”

Frances Tilney Burke is a visiting research fellow in foreign and defense policy at the American Enterprise Institute and a proud Army spouse.