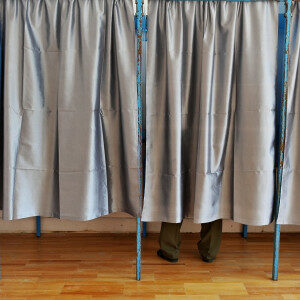 For another point of view see: Point: Universal Voting Makes Sense for a Full, Healthy Democracy

A handful of countries, most notably Australia, impose mandatory voting, with citizens facing fines and punishments if they don’t appear at the polls. And every few years, somebody proposes bringing this practice to the United States as a good-government reform that would allegedly improve the health of our democracy.

Luckily, Americans remain unimpressed by the idea. A report advocating mandatory voting by the Brookings Institution and Harvard Kennedy School’s Ash Center acknowledged as much. When polled, they found only 26 percent of Americans favored the idea, with 64 percent opposed.

The claimed benefits of mandatory voting are highly dubious. All available evidence is that it would have little effect on election outcomes since non-voters tend to break down about the same as for voters in their partisan preferences. The main effect visible in Australia is the frequency of the so-called “donkey ballot,” where voters randomly pick a candidate or party without giving it any thought, often simply choosing the option listed first on the ballot. Others return a blank ballot, clearly going through the motions only to avoid punishment.

Beyond the lack of clear, practical benefit, mandatory voting sits uneasily with American principles. The First Amendment protects not only freedom of speech but also freedom from compelled speech. And even if a coerced voter shows up and casts a spoiled ballot, participating in an election is a speech act. It implies affirmation of the legitimacy and desirability of the electoral system and our current constitutional order. That might be a correct opinion, in my view, but it is not one Americans should be forced to affirm.

There is a long history in the United States of principled abstention from voting, including groups such as the Quakers and Jehovah’s Witnesses, who are motivated by a thoroughgoing religious faith in strict pacifism. Others, such as anarchists ranging from libertarians to socialists, reject the moral legitimacy of all governments and do not want to lend their endorsement to the state. Faced with the need to accommodate such groups or at least some of them, compulsory voting faces two bad options. Either any person can invoke a religious or philosophical exemption, rendering the whole exercise pointless, or must put the government in the untenable position of judging which reasons are good enough.

Even if the First Amendment argument doesn’t convince you, the last thing our bloated criminal justice system needs is yet another reason to impose fines and enforcement actions on Americans, especially when such burdens will fall disproportionately on minorities and the poor. Every law must be enforced, and the police in our country already have more than enough laws to enforce.

Even if the political will could be mustered to pass a compulsory voting law, the courts are unlikely to permit it under longstanding First Amendment principles. During World War II, the court faced another attempt at coercing civic affirmation: mandatory recital of the Pledge of Allegiance in public schools. Again, Jehovah’s Witnesses refused, believing that this was an act of flag-worship akin to idolatry.

Justice Robert H. Jackson, writing for a 6-3 court, offered one of the most stirring articulations of America’s radical free speech jurisprudence: “If there is any fixed star in our constitutional firmament, it is that no official, high or petty, can prescribe what shall be orthodox in politics, nationalism, religion or other matters of opinion.”

Showing up to vote may well be a laudable act, one to be encouraged, an admirable exercise of civic duty and participation in our system of government. But as a matter of opinion, it is not the government’s role to impose that view as compulsory orthodoxy. If you don’t want to vote, it’s your right not to vote.

Andy Craig is a staff writer at the Cato Institute, where he is the associate editor of the bimonthly magazine Cato Policy Report and the quarterly publication Cato’s Letter. He wrote this for InsideSources.com.