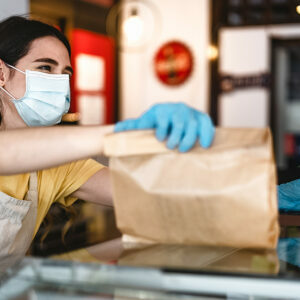 We’ve all seen them — the “help wanted” signs posted in business windows and even the “we’re sorry” notes, apologizing for long waits and reduced hours due to worker shortages.

Despite what was anticipated as a tough spell ahead for workers amid the COVID-19 pandemic, by some measures, 2021 has turned out to have some surprisingly positive outcomes for workers. There are record job openings, strong wage gains, new benefits packages, and increasingly flexible workplace policies.

But the picture isn’t quite so bright for employers, which ultimately is bad for employees.

For starters, an estimated 200,000 establishments went out of business because of the pandemic.

Many of those remaining face significant struggles, including finding the workers they need, adapting to new and changing safety standards, and revising workplace policies and compensation packages to meet employees’ desires for increased flexibility and other workplace changes.

Employers are also trying to plan ahead for an uncertain future. They’re also bracing for a litany of potential new government policies that would make it harder for them to do business and to grow their workforce.

This is far from what anyone expected would come out of the COVID-19 pandemic.

In July 2020, the Congressional Budget Office projected the unemployment rate would be 8 percent in September 2021. Instead, it fell below 8 percent to 7.8 percent a full year earlier, in September 2020, to the August 2021 figure of 5.4 percent.

Normally, a 5.4 percent unemployment rate (vs. 3.5 percent prior to the pandemic) would still give employers the upper hand, with plenty of available workers. But not today.

Instead, employers face a new phenomenon with elevated unemployment alongside a severe labor shortage. There are currently a record-shattering 10.1 million job openings in the United States; a full 2.5 million more jobs than the previous November 2018 record of 7.6 million job openings.

Businesses are anxious to resume their pre-pandemic operations, and with the government sending three rounds of stimulus checks that led to Americans saving nearly three times as much as normal — an extra $2.1 trillion — in the year following the pandemic, consumers are anxious to buy their products and services. But there aren’t enough workers to meet the demand.

And yet, many employers feel like they can’t ask the workers they do have to perform new tasks or to work more hours, out of fear that they’ll quit. And workers are doing so in record-high numbers, with an average of 3.8 million workers quitting their jobs each month. The struggle for workers has led to employers increasing wages, providing signing bonuses, and offering new and expanded benefits, college tuition reimbursement, and paid family and medical leave.

Moreover, employers are responding to workers’ desires for increased flexibility and remote-work options. This was already a trend prior to the pandemic, and fortunately, some of the technology that employers have adapted will make it easier to meet these desired changes going forward.

It is hoped more workers will return to the labor market with the end of federal unemployment bonuses on Sept. 4, and alongside a more normal school year for kids. But employers still face an uncertain future when it comes to the scores of federal labor laws that dictate how they can and must do business.

For example, under the PRO Act that is part of the Democrats’ $3.5 trillion budget reconciliation package, it would become extremely difficult for companies to hire contractors. That would make it especially hard for small businesses to compete as employers with four or fewer employees rely on seven contractors, on average, to run their businesses.

The entire franchise business model that works for 750,000 establishments that employ 8 million workers in the United States could be upended by changing definitions and unwarranted legal liabilities.

Politicians and bureaucrats could get between employers’ and workers’ best interests by replacing performance-based pay with rigid pay schedules and imposing a one-size-fits-all federal paid family leave program that would crowd out more flexible and accommodating employer-provided ones.

Moreover, the Biden administration’s blatant attempt to force workers into unions could further drive up costs for taxpayers and consumers, limit job growth, and make it harder for workers to achieve the flexible workplace policies they increasingly desire.

And finally, the president’s planned corporate tax hike would give U.S. corporations the highest tax rate among the Organisation for Economic Co-operation and Development — a move that would especially hurt small businesses, with 85 percent of companies that would face tax hikes having only 20 or fewer employees.

While the state of labor in 2021 is incredibly strong for workers, that will almost certainly change if policymakers follow through on their plans to raise taxes, impose new regulations, and micromanage employer and employee relationships.

Rachel Greszler is a senior policy analyst specializing in economics and entitlements in The Heritage Foundation’s Center for Data Analysis.