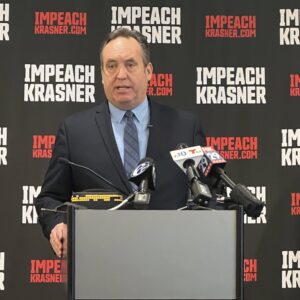 Corman Allies With Cops in Push to Impeach Krasner

Senate President Pro Tempore Jake Corman, a Republican candidate for governor, continued to make the case that Philadelphia District Attorney Larry Krasner should be impeached, taking his quest into Krasner’s backyard with a Philadelphia press conference with the police.

Philadelphia set an all-time record for homicides last year with more than 550 people killed in the city. It is on pace to surpass that in 2022, said Corman in a press release. Although police made the highest number of arrests last year for violent gun crimes since 2015, more violent gun cases were dismissed every year Larry Krasner has been in office. Since 2015, just 21 percent of shootings in the city have led to criminal charges. In January 2022 alone, there were 100 carjackings in the city.

“Philadelphians are experiencing an unprecedented crisis of violence. It was surprising to hear District Attorney Krasner finally admit as much last week,” Corman said. “Krasner sits in his corner office working on his book or planning his next reality show. He’s never taken responsibility for the failure of his social policies that have led directly to the deaths of hundreds of Philadelphians and devastated their families. That’s why it’s time to impeach Larry Krasner.

“I want to thank law enforcement leaders for joining me in this important effort,” Corman added. “Our police have been working tirelessly to protect their fellow citizens. We have laws on the books to put the bad guys away. It’s clear Larry Krasner won’t use them, so it’s time to remove him so we can get back to making Philadelphia a safe city again.”

Corman, of Bellefonte, is one of a crowded field of Republican hopefuls trying to gain the GOP primary voters’ nod.

Krasner’s spokesperson did not respond to a request for comment Wednesday. However, previously, a spokesman called Corman’s call for impeachment and removal of the district attorney “a stunt.”