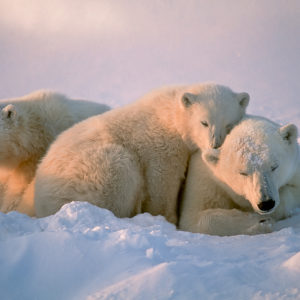 A new study warns that polar bears could become nearly extinct by the end of the century if we don’t enact strict climate policies.

However, it relies on an exceptionally unlikely climate scenario, where stagnating global coal use will suddenly balloon six-fold over the century.

The lead researcher calls polar bears the “poster child of climate change” and the study helps revive a particular climate scare that has gone surprisingly quiet over the past decade.

In 2007, the online climate news outlet Grist predicted that polar bears would soon be extinct. They told us that models likely underestimated the decline in Arctic sea ice, and told us that “when the ice goes, the polar bears will go.” They expected polar bears to be extinct by 2030 – and possibly even by today.

Grist wasn’t alone. A National Geographic videographer of a polar bear declared that with declining arctic ice, we needed to awaken to climate change and lower carbon emissions.

People Magazine promoted International Polar Bear Day to raise awareness for the animal and climate change causes. Before his death in 2007, famed author Kurt Vonnegut was worried that the last of the polar bears might be dying out. And Al Gore warned us of polar bears drowning in his Oscar-winning 2006 documentary, “An Inconvenient Truth.”

Such stories of the decline and possible demise of polar bears have been highly effective in galvanizing attention, engagement and action on climate change.

The polar bear has been used by environment organizations for fundraising and stamps with images of cute polar bears released around the world to increase climate awareness. Yet, the numbers on polar bears tell a very different story.

The Arctic where polar bears live is huge — about twice the size of the continental U.S. That is why counting a few tens of thousands of polar bears will always be a very difficult task. Nonetheless, the international Polar Bear Specialist Group has over the past four decades done its best to estimate how many polar bears exist at any time.

When these conservationists began studying the polar bear population in the 1960s, they clearly identified that the biggest threat to polar bears was indiscriminate hunting.

Not surprisingly, there was a great deal of uncertainty about the absolute number of polar bears — it was estimated at somewhere between 5,000 to 19,000. Let us use the midpoint of 12,000 polar bears in the 1960s.

The amazing, if untold, story is that the midpoint estimate has never been as high as today. The global number of polar bears stands between 22,000 and 31,000, or a midpoint of 26,500.

The simple fact is that polar bears are not going extinct. They are not becoming fewer and fewer. Since society started counting in the 1960s, polar bears have never been more abundant.

This is a tremendous success story for conservation. We have seen polar bears more than double in numbers since the 1960s. Yet, this is not the story we have heard.

For decades we have been told that the polar bears are dwindling and possibly going extinct by 2020. As the drastic claims have become ever more untenable by the facts, campaigners have simply mentioned polar bears less and less.

Indeed, The Guardian, a British media outlet whose stated mission is to respond to the climate crisis, decided last year to not use polar bears as much for their climate illustrations. Similarly, Al Gore’s climate sequel a decade later just never mentioned polar bears.

Let’s be clear: climate change is real, and we should tackle it. But we need to be smart about climate actions. Most of our expensive climate policies will have virtually no impact.

Current climate promises from the Paris agreement are expected to reduce temperatures by less than 0.4°F by the end of the century, according to UN climate models — and reports project we are not even living up to the Paris promises.

Instead, economic research clearly shows that the most effective climate policies should dramatically increase green innovation. Today, it is incredibly expensive to switch entirely to green energy on current technology.

But if we innovate the price of green energy down below the price of fossil fuels, we will eventually see everyone — China, India, Africa and Latin America along with rich countries — switch.

And how to best help the polar bears? Current climate policies that will change temperatures infinitesimally in a century will help nothing. But another approach could. You rarely hear about it, but hunters each year kill off 900 polar bears.

If we want more polar bears, maybe we should simply stop shooting quite as many.