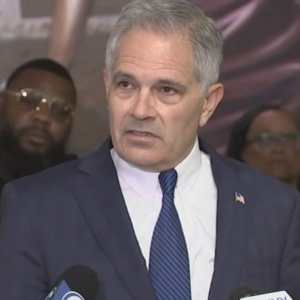 Testimony before the House Select Committee investigating crime in Philadelphia turned away from personal stories and toward data and policy Friday. It was a sharp contrast with Thursday’s emotional stories from families who lost loved ones to homicide.

Witnesses linked the city’s decrease in firearms convictions since 2018 with progressive District Attorney Larry Krasner’s decision to withdraw his office from the Pennsylvania District Attorney’s Association that same year.

Mark Bergstrom, executive director of the Pennsylvania Commission on Sentencing, presented the data-rich Comprehensive Study of Violations of Pennsylvania’s Uniform Firearms Act (VUFA). From 2015 to 2020, the study examined arrests and convictions over firearms charges, misdemeanor, and felony charges, with or without additional violence charges.

Bergstrom noted that unlike the other 66 counties in Pennsylvania, all charges in Philadelphia must be approved by the district attorney’s office. As the state’s lone first-class county, it is responsible for over a third of all VUFA dockets. More than half of those are co-charged with violent offenses. The number of VUFA dockets filed, especially those with first or second-degree felony charges, has risen since Krasner took office in 2018. The downward trend from 2015 to 2017 of violent offenses accompanying VUFA dockets reversed from 2018 to 2020.

While the study found statewide guilty verdicts have dropped in the timeframe, the sharpest decline in rates appears to be from Philadelphia. Krasner’s office has seen conviction rates on VUFA charges with first or second-degree felony drop from 88 percent convicted in 2015 to 69 percent in 2019 and 64 percent in 2020. Overall, the VUFA conviction rate in the city is 77 percent in the timeframe studied, trailing the statewide average of 83 percent.

The increase in cases dismissed or withdrawn by prosecutors has been driving down the conviction rate in Philadelphia. The city’s acquittal rates and been rejected by the district attorney’s office, which covers cases withdrawn after the initial filing, are higher than the state averages. The “nolle pros” dispositions rate has jumped from 7 percent in 2015 to 21 percent in 2020.

Bergstrom described the pattern as “extreme on both ends.” Philadelphia also has higher recidivism rates for VUFA charges within three years.

Bergstrom noted the laws are not consistently enforced across counties at times. “The use of the laws can be spotty,” he said, referring to one VUFA that wasn’t being charged when available or dropped as part of plea bargains.

“Before we start thinking about changing the law, let’s make sure we use it with fidelity, when possible, and make sure it’s not being negotiated away,” he said.

“At the time, the DA told the media that our policies that we support were too punitive and too focused on incarceration. We would obviously disagree on that.”

Rep. Martina White (R-Philadelphia) was pleased with the conduct of the hearing.

“Today was more about the facts. [Bergstrom’s testimony] was very valuable because it provided us intimate details as to the process of the violation of our Uniform Firearms Act,” White said. “What I learned is Philadelphia has three times more gun crime cases that are being withdrawn than anywhere else in the state, and it looks like those types of cases, the offenders, the criminals, are more likely to re-offend.”

The committee has not announced further public hearings.