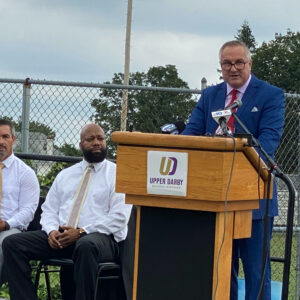 The borough and school district reached an agreement in principle on Monday that will result in the renovation and transfer of ownership of the youth athletic fields to the borough as the district moves forward on building a new middle school. The agreement also addresses community concerns related to traffic and parking.

Under the agreement, the Upper Darby School District will renovate the existing athletic fields as part of the construction of the Clifton Heights Middle School on the portion of the property closest to North Springfield Road and then turn ownership of the athletic fields over to Clifton Heights Borough. While the Upper Darby School District currently owns the property, the land has been leased by the Borough of Clifton Heights for $1 a year since 1977 for youth athletic fields and a community gathering space.  The proposal to construct a school on the site has been a topic of contention and disagreement between the school district, the community, and local elected officials.

“Over the years, these athletic fields and open space have become an integral part of our community and an important part of the quality of life for both individual residents and families,” said Lombardo, a candidate for Delaware County Council.  “These fields represent our borough’s only greenspace, so this agreement represents a major victory for the local community.  It enables us to preserve these fields for the use of our youth sports teams and residents, as well as continue to utilize this space for community events and gatherings.”

“The borough and school district have been in discussions for several months, and I appreciate Superintendent McGarry’s willingness to work with me to find the middle ground that both addresses the concerns of the local community and meets the needs of the school district,” said Lombardo, who noted that because the school district owns the property, construction of a school at the site — consistent with the borough’s ordinance and zoning codes — was inevitable.  “I think this agreement ultimately gets us to the best possible situation for our community and our residents.”

During the construction phase of the new Clifton Heights Middle School along Springfield Road, the Upper Darby School District has indicated that it will allow the borough’s athletic teams to utilize other school district fields.  Once construction of the school is completed, the athletic fields and open space will be subdivided and deeded to the borough. Lombardo said this was a priority for him, because it guarantees that the borough’s fields will be available to youth teams and community organizations.  Lombardo also noted that local youth sports organizations, such as the Clifton Heights Police Athletic League, will be able to utilize the indoor athletic facilities of the new school for youth basketball programs in the local community.

The agreement addresses community concerns related to parking and traffic, as well. One major concern was the potential loss of street parking in the borough’s business district. That parking will be retained through the widening of intersections and the addition of a turning lane along North Springfield Road at the intersections of Oak Avenue and North Sycamore Avenue.  The school district has also agreed to develop a plan to address parking concerns raised by residents along Sycamore Avenue.