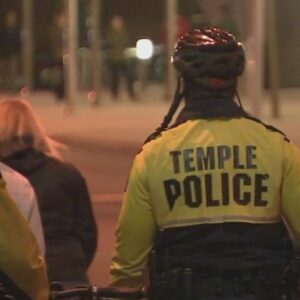 CLAY: From Philly to NYC, College Students Are Victims of Big City Violence

All were murdered on or near campus in November or early December.

Zheng was the third U. of  C. student killed this year.

Asian and Black students at the University of Chicago have noticed a rise in anti-Black fervor on campus, especially on social media. One Black student, Keegan Ballantyne, a member of the Organization of Black Students, said some students have even asked “if it’s OK . . . to just fear all Black men walking around in the community” in the Hyde Park area.

In each case — Temple, Morehouse, Columbia, University of Chicago — the perpetrator apprehended by police was a young Black male, some in their teens.

It must be an urban thing.

Chicago, for instance, is already suffering a decrease in foot traffic in the trendy and historic Magnificent Mile shopping area because of a spate of nationally publicized smash-and-grab robberies.

“People are paying attention to this,” Kimberly Bares, president and CEO of the Magnificent Mile Association, a private membership organization focused on promoting the shopping district along North Michigan Avenue, told the Chicago Tribune. “If there is an incident or concern about an incident, people are choosing not to come downtown.”

Will this same fear spread to campuses and their surrounding areas for college students, especially those from other countries?

There was a time when parents sent their children off to an institution of higher learning with an expectation of safety within the ivory towers of academia.

Tio Hardiman, executive director of the Chicago-based community help-group Violence Interrupters, says this is a different time. “Gun violence continues to spread like wildfire,” Hardiman told InsideSouces. “Whether you’re a college student or just walking out of your house. No one is immune.”

Then, Hardiman offered specifics, “I blame about 20 percent of the violence on rap music — the violent lyrics. Some of these young people have no structure in their lives; they look up to these rappers, where revenge is part of the culture. Revenge killings are at an all-time high.”

In each case, the first cry for help is simply this: Beef up security on the campus perimeter. Increase surveillance.

It’s a peculiar dynamic: During a time when some are calling for a de-escalation of police presence during the post-George Floyd Movement Era, affected college communities are calling for more cops.

Note that last week the editorial board of Boston University’s independent student newspaper called for “’outright abolishing” campus police, who have an “egregious history and a present of violence and racism.” Ridding the campus of cops would help address a “’safety issue” students face, a writer argued in the Daily Free Press.

We’ll see what the line will be if a BU student, heaven forbid, is murdered.

An old adage is apropos here: You don’t miss the water until the well runs dry.

That says it all.