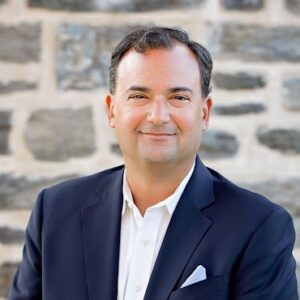 When Christian Nascimento’s father immigrated from Italy to Norristown, Pennsylvania, he wanted a better life for his children. Now his son is running for Congress, he says, to make a better life for everyone.

Nascimento is a Republican seeking the 4th Congressional District seat, which includes most of Montgomery County and parts of Berks County. His opponent, Democratic U.S. Representative Madeleine Dean, has held the seat since 2018.

“I’m a first-generation American,” Nascimento told the Delaware Valley Journal. “My father immigrated to this country in 1952. His family settled in Norristown. That’s where I was born and that’s kind of been the starting point for everything. I went to college at Widener University and got an MBA from Villanova. Embarked on a business career and along the way found time to get involved in a number of activities, including being president of the Methacton School Board.

“I know the people in Montgomery County,” Nascimento added. “I’ve lived here almost my whole life. And in their hearts, they really just care about their neighbors and they care about the country. And I think that I can put forward a really optimistic view of how we can move forward and I think that will resonate with people.”

After a successful career with Comcast, where he served as the vice president of product, jumping into politics seemed like a no-brainer for Nascimento.

“I’ve always felt a calling to serve,” Nascimento explained. “And that’s why I’ve served in a number of volunteer positions and ran for school board. I’ve always felt like because the country gave so much to me and my family and took my father’s family in, that was something that I owed to give back. And the call has just gotten stronger and stronger over the past few months and years since I’ve seen everything just get so dysfunctional.”

Nascimento often gets asked, “Why do this?” His answer is simple.

“There’s really two reasons. I love America and I hate what’s happening to America right now,” Nascimento explained. “What I’ve done my whole career, whether it’s in business or in things I’ve done from a public service or volunteer standpoint, is bring people together and build consensus. That’s really what I want to do here is try and offer a new way forward and a way that people can get behind and actually get the government back to serving the people.”

“I’ve got four young kids,” Nascimento said. “And I don’t want to sit back years from now and look back and say, ‘I had a chance to do something, and I didn’t do it.'”

When it comes to political experience, Nascimento stated his background is primarily in grassroots organizations.

“My political background has really been just around grassroots politics,” Nascimento stated. “I’ve been a committee person for the Lower Providence and chairman of the Lower Providence Republican Committee. I’ve put my money and my mouth behind candidates that I believe in.”

There are three core issues Nascimento says he intends to focus on for his campaign for Congress: education, job opportunities, and security.

“I feel like we’ve lost sight a little bit on what our public school systems are supposed to be doing,” he said. “I think there’s nothing more critical to the future of the country, whether it’s economic security, national security, or anything, than to make sure we have a really well-educated populace. So education is going to be a key focus of mine. Making sure that we’re teaching kids the right things, making sure parents have a real say in where their kids are going and what they’re learning and really making education what it’s supposed to be: which is lifting our children up and giving them opportunities. The second piece kind of leads right from that. You give a child a good education, they can get a good job.”

In the 2020 election, Dean won 59.5 percent of votes over Republican Kathy Barnette, who is now running for the U.S. Senate. However, Nascimento isn’t concerned with those numbers.